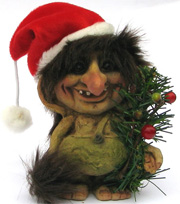 Back in 2016, so-called copyright-trolling landed in Sweden for the first time via an organization calling itself Spridningskollen (Distribution Check). Within months, however, it was all over, with the operation heading for the hills after much negative publicity.

February this year, another wave of trolling hit the country, with Danish law firm Njord Law targeting the subscribers of several ISPs, including Telia, Tele2 and Bredbandsbolaget. Thousands of IP addresses had been harvested by its media company partners, potentially linking to thousands of subscribers.

“We have sent out a few thousand letters, but we have been given the right to obtain information behind many more IP addresses that we are waiting to receive from the telecom operators. So there are more,” lawyer Jeppe Brogaard Clausen said in October.

But while Internet users in Sweden wait for news of how this campaign is progressing, multiple new threats are appearing on the horizon. Swedish publication Breakit reports that several additional law firms in Sweden are also getting in on the action with one, Innerstans Advokatbyrå, already sending out demands to alleged file-sharers.

“By downloading and uploading the movie without permission from the copyright holder, you have committed a copyright infringement,” its letter warns.

“However, the rightsholder wishes to propose a conciliation solution consisting of paying a flat rate of 7,000 kronor [$831] in one payment for all of the copyright infringements in question.”

The demand for 7,000 kronor is significantly more than 4,500 kronor ($535) demanded by Njord Law but Innerstans Advokatbyrå warns that this amount will only be the beginning, should an alleged pirate fail to pay up and the case goes to court.

“If this happens, the amount will not be limited to 7,000 kronor but will compensate for the damage suffered and will include compensation for investigative costs, application fees and attorney fees,” the company warns.

Breakit spoke with Alex Block at Innerstans Advokatbyrå who wouldn’t reveal how many letters had been sent out. However, he did indicate that while damages amounts will be decided by the court, a license for a shared film can cost 80,000 kronor ($12,800).

“This will last for a long time, and to a large extent,” he said.

Of course, we’ve reported on plenty of these campaigns before and their representatives all state that people will be taken to court if they don’t pay. This one is no different, with Block assuring the public that if they don’t pay, court will follow. The credibility of the campaign is at stake, he notes.

“It’s our intention [to go to court], even if we prefer to avoid it. We must make reality of our requirements, otherwise it will not work,” he says.

Breakit says it has seen a copy of one letter from the lawfirm, which reveals a collaboration between US film company Mile High Distribution Inc. and Mircom International Content Management & Consulting Ltd.

Mircom is extremely well known in trolling circles having conducted campaigns in several areas of the EU. German outfit Media Protector is also involved, having tracked the IP addresses of the alleged pirates. This company also has years of experience working with copyright trolls.

With several other law firms apparently getting in on the action, Swedish authorities need to ensure that the country doesn’t become another Germany where trolls have run rampant for a number of years, causing misery for thousands.

While that help may not necessarily be forthcoming, it’s perhaps a little surprising that given Sweden’s proud and recent history of piracy activism, there appear to be very few signs of a visible and organized pushback from the masses. That will certainly please the trolls, who tend to thrive when unchallenged.