When we first wrote about YouTorrent, we never expected the site to grow in popularity as quickly as it did. A month after its launch the site was getting millions of visitors, and it continued to grow. In fact, no BitTorrent site had ever grown as fast as YouTorrent.

Unfortunately this astronomical growth didn’t last. In April the meta-search engine stopped indexing sites like The Pirate Bay, isoHunt, and other sources that provide links to unauthorized copyrighted files. They even considered selling the site at the time, but this never went though. Unsurprisingly, this change cost the site most of its visitors, who moved on to YouTorrent alternatives.

After a while however, the traffic stabilized, and a few weeks later it started to grow again. Today, four months after this drastic change, YouTorrent is ready to move on, as it launches the largest legal torrent search engine with tens of thousands of torrents adding up to a whopping 6TB of data.

“We feel that a full meta-search engine is a better experience for our users considering our switch to legal content,” Patrick, the co-founder of YouTorrent said. “We now return accurate seed and peer data and results are quick and easy to navigate, and more in line with traditional search engine result pages.”

The new site searches verified torrents on sites such as Jamendo, Vuze, BitTorrent, Legaltorrents, Legittorrents, Gameupdates, Wortharchiving, BT.etree and Mininova’s featured torrents section. By default the results are ordered by relevance, but they can also be sorted by number of seeds and peers, the size of the torrent, the upload dates and the number of total downloads so far.

For music files, YouTorrent has also included a link to the Bitlet streaming tool, so users can preview tracks before they decide whether or not they want to download them. Similar to the old design, there is a list of related searches in the sidebar, which may serve as inspiration. The YouTorrent blog has been updated, and has some great content as well.

Patrick further told us that they are currently working on a content distribution platform. This will allow individual publishers to upload files to the site, and YouTorrent will make sure that the files are seeded. The content distribution platform will be similar to Mininova’s CD, but Patrick assured us that it will include some great features that are unique to YouTorrent.

“Although we have lost some traffic we are still very popular and serving hundreds of thousands of searches a day,” Patrick said. “This is very encouraging and we believe with the new service this will continue to grow as our content aggregation reach and depth increases.”

Going legal has cost the site more than half of its traffic. The new interface and several other updates are aiming to get at least some of these visitors back, and make the site one of the big players in the “legal” torrent niche. Time will tell if they have made the right decision. 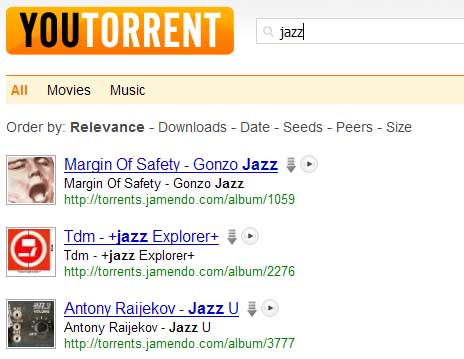 Create Your Own YouTorrent Clone in 1 Minute