The research targeted Internet users over 12 years old with the aim of gathering information on the way they consume movies, music, TV shows, video games, software and books to assist with copyright enforcement policy making. The results are now in and they interesting to say the least.

The researchers split infringers into several categories according to their attitudes and motivations.

So-called ‘Justifying Infringers’ were the group who demonstrated the highest levels of infringing behavior. This group accounted for 9% of all infringers, 24% of total infringed volume and 2% of total digital consumers. They felt that they’d already spent enough on content (the researchers say this was confirmed) but like to try before they buy. They’re also the most receptive group when it comes to considering fairly priced legal alternatives.

The ‘Digital Transgressors’ group (9% of all infringers, 22% of total infringed volume, 2% of total digital consumers) consumed more films and TV shows than the ‘Justifying Infringers’. While they showed the least remorse over their behavior, this group had the highest fear of getting caught and the researchers say they would be the most receptive to warning notices sent by ISPs.

The largest group, the ‘Free Infringers’ (42% of infringers, 35% of infringed volume, 10% of total digital consumers) lived up to their name. They all download content because its free and pay for the lowest proportion of legal content compared to the other infringers.

Ambiguous Infringers (39% of infringers, 20% of infringed volume, 9% of total digital consumers) had the lowest level of digital consumption and the highest proportion of paid and legal content. They made less attempt to justify their infringing.

“Most infringing segments found it easy to find content on the internet for free which would normally be paid, ranging from 45% for the Ambiguous Infringers to 76% for the Top 20% infringers,” the researchers note. “Among non-infringers the figures were notably lower, ranging from 28% to 45%.”

Looking at the infringers overall, the researchers made some very interesting discoveries, particularly among the most prolific.

This means that the other 80% of the total infringers accounted for just 12% of all infringements by volume.

While they are undoubtedly prolific consumers of illicit content, the Top 20% group proves to be of great value to entertainment companies. Not only does the group account for 11% of all legal content consumed, but they also spend the most.

Across all content types, the top 20% of infringers on average not only spend more than the remaining 80% of infringers, but also more than consumers who never infringe. The figures are impressive – the 20% worst infringers spent £168 over the six month monitoring period with the remaining 80% spending £105. Tailing in last place were the ‘honest’ consumers with just £54 spent, three times less than the prolific pirate group.

“For all content types there were differences in terms of payment between the two groups; the large majority (92% overall) of content consumed by the Top 20% Infringers was free. This compared to 76% among the Bottom 80% Infringers,” the researchers write. “However, because they consumed more content in total, the Top 20% purchased more ‘paid for’ digital files in absolute terms than the Bottom 80%.”

Later on in the report the researchers reveal which services – authorized and unauthorized – respondents use to access content. Even for the infringers, authorized sites such as YouTube and BBC iPlayer prove most popular as the table below shows.

Interestingly, despite being blocked in the UK during the research period, The Pirate Bay is still being used by almost a third of the top 20% of infringers. The site was used by just 9% of the bottom 80% of infringers which perhaps suggests that the more hardcore the pirate, the more likely they are to unblock a site.

So what might encourage infringers to stop accessing content illegally? As usual, pricing, availability and convenience top the list. Interestingly, fears over internet disconnections in the Top 20% group trumped fears of being sued. 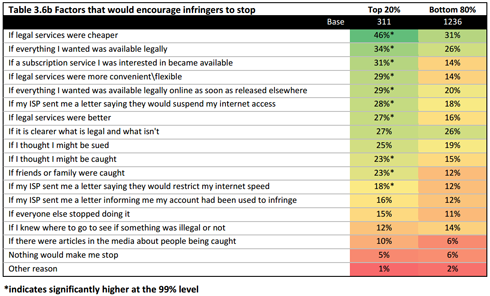