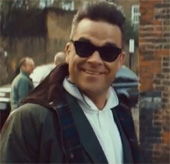 UK rapper Dizzee Rascal and international superstar Robbie Williams have teamed up for a single from Dizzee’s new album, “The Fifth”.

The song, called ‘Goin Crazy’, features the pair cruising around the East End of London in mobility scooters pimped to look like the two-wheeled scooters featured during the intro of The Who’s classic movie, Quadrophenia.

After Rascal appears from a smoking and exceptionally spiky car, he and Williams are joined on their cruise by a number of pensioners.

But it’s the start of the video that succeeded in raising eyebrows and piquing our interest. As Robbie moves into shot, walking away from camera, the focus pans from his colored sneakers up to his coat, on which is painted two very familiar words – MEGA and UPLOAD.

But could this really be related to the now-defunct Megaupload? Well, we’ve sen pop tie-ins before with the controversial MegaSong of 2011 – big name artists were only too pleased back then to be associated with the file-sharing site. In the song Goin Crazy, Dizzee Rascal also weaves ‘Megaupload’ into his lyrics – it hardly seems like an accident.

And, adding to the intrigue, Kim Dotcom himself has commented on the development.

“Robbie, I love the Megaupload jacket!” he said on Twitter, adding: “Ready for Megabox?”

As first announced by Kim Dotcom in a guest post for TorrentFreak in 2011, Megabox is a soon-to-launched platform designed to bring music to the masses and reward artists by giving them the lion’s share of the profits. Its development was held back due to the raids on Megaupload in January 2012 but is now on course to launch sometime in the coming months.

If there is a link, and Robbie and Dizzee are indeed promoting Kim Dotcom’s new venture, this would be another huge coup for the larger-than-life entrepreneur. If it isn’t, and the guys are just having fun, Kim will settle for that since it’s still quite a compliment. It has to be said though, Kim appears to be taking quite an interest in this video.

So here it is, enjoy it while you can because if previous experiences are anything to go by, it might not stay up long.