Seattle-based Getty Images is an agency
with control over an archive of millions of stock images. It also has a reputation for strongly protecting its copyrights and chasing down companies and individuals who use Getty images without paying an appropriate fee.

Late December 2015, established US-based photographer Carol Highsmith was a recipient of a Getty threat via License Compliance Services (LCS) on behalf of Alamy, another Getty-affiliated company.

“We have seen that an image or image(s) represented by Alamy has been used for online use by your company. According to Alamy’s records your company doesn’t have a valid license for use of the image(s),” the letter began.

“Although this infringement might have been unintentional, use of an image without a valid license is considered copyright infringement in violation of the Copyright Act, Title 17, United States Code. This copyright law entitles Alamy to seek compensation for any license infringement.”

Targeting Highsmith with this particular threat was problematic. The image in question was one of her own. It was among thousands of other images she previously donated to the Library of Congress and made available to the public to reproduce and display for free. Highsmith subsequently discovered that Getty and its affiliates were making available more than 18,000 of her other photographs too.

The photographer responded with a $1bn lawsuit but the stock image company didn’t back down. Fighting back, Getty said it would vigorously defend its position based on the fact that Highsmith had placed her work in the public domain.

Considering the David and Goliath nature of the case (not to mention Getty’s reputation for picking on the little guy), observers hoped that during the lawsuit Getty would at least get a bloody nose. That has not come to pass.

“Upon consideration, the Court grants defendants’ motions,” he added.

With the federal claims gone, three state law claims werincluding that Getty charged licensing fees for images when it shouldn’t have and collected settlements from alleged infringers when it had no right. However, these claims have now also been dismissed, along with the rest of the case.

“It is hereby stipulated and agreed, by and among the parties, that this action shall be dismissed with prejudice pursuant to Rule 41(a)(l)(A)(ii) of the Federal Rules of Civil Procedure, each party to bear its own costs and fees,” the Judge wrote in his dismissal.

Since the case was dismissed with prejudice, it is done and cannot be brought back to court. 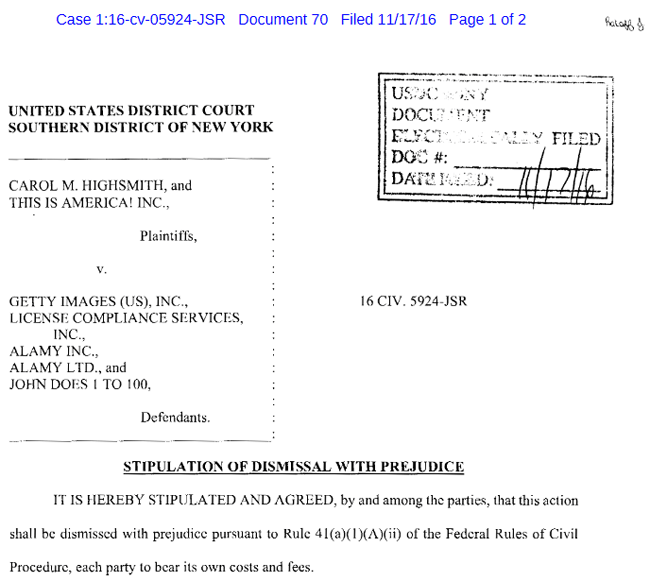 The Judge added that a memorandum explaining the reasoning behind the rulings will be issued in due course, but it seems fairly clear that since Highsmith had passed her images into the public domain in 1988, that seriously undermined her case.

The terms of the settlement have not been released, and a lengthy protective order issued early November forbids all parties from discussing any information obtained during the pre-trial discovery phase.