2011 Oscars: Pirates Have to Wait Longer for Fewer Leaks

Waxy’s Andy Baio has been collecting detailed piracy stats for every Oscar-nominated movie since 2003, and this data is revealing some interesting trends.

The statistics for all 2011 nominees, excluding the documentary and foreign films categories, show that 20 of the 29 films are now available on BitTorrent in DVD quality. More than half of the films have leaked as a screener and 7 of those are estimated to be leaked by Academy members.

Despite the widespread availability of these high-profile movie titles, the overall trend is that fewer high quality copies leak every year. In common with last year, the number of screener copies that surfaced online has been reduced – 38% of the all the nominated films, down from the record low of 41% this time last year.

If retail DVDs are thrown into the mix we find that 66% of the films are now available in high quality format, down from 79% around the same time last year. Interesting statistics, which are obviously welcomed by the MPAA and other Hollywood players.

Another statistic that stands out is the average time between the theatrical release in the US and the leak of the film online. This average wait time (including CAM releases) has gone up to 37 days this year, the longest wait since Baio started tracking these statistics in 2003. 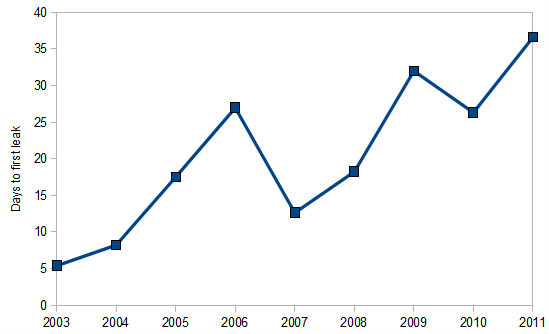 It has to be noted though, that the 37 days average is a skewed picture and most leaks come out much quicker. The median leak time is only 17 days, but the average waiting time is pushed up by three movie titles for which the pirating audience had to wait for more than 100 days.

Finally, we want to draw attention to some statistics which showing that availability and box office success don’t always lead to high piracy rates.

Toy Story 3, the most successful film at the box office last year, was available in a high quality copy on BitTorrent just a day after its premiere. All the ingredients for an unprecedented number of illegal downloads were there, but somehow it didn’t even make it into the list of 2010’s most downloaded movies.

Also, this year, Rabbit Hole was only one film for which the first screener leak came out before the theatrical release last December. Despite this unfortunate timing, the film has been downloaded by only a few thousand people in the past several weeks, trailing dozens of other films in terms of popularity.

Despite the lack of a high correlation between early availability, box office revenues and piracy, the movie industry continues to worry about piracy and the losses it may generate. Given that overall movie piracy is still on the rise, we expect that both measures against torrent sites and screener leaks will be intensified throughout 2011.