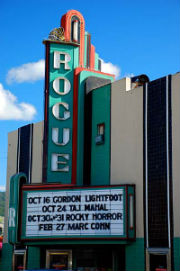 Generally speaking movie theaters are the oil of the movie industry, generating billions of dollars in revenue each year.

However, it appears that not all theaters are playing along with Hollywood’s rules.

The Rogue Theatre in Oregon is not a classic movie theater but describes itself as a regional non-profit performing arts center. As such it hosts cultural events, including theater, concerts and film screenings.

One of its events is the yearly screening of the cult movie ‘The Rocky Horror Picture Show‘ around Halloween. Although the film is nearly 40 years old it still has a dedicated fan-base, many of whom dress up in costume to participate live.

The Halloween screenings have been quite successful, but according to 20th Century Fox there is one problem. Apparently, The Rogue Theatre never bothered to license its screenings and is therefore infringing on the copyrights of the movie studio.

This week Fox filed a complaint at a federal court in Oregon demanding compensation for Rogue’s defiant acts. According to the complaint, the movie studio first warned the theater three years ago. Despite multiple warnings, the screenings haven’t stopped.

“Fox first learned of Rogue’s infringing conduct in or around October 2010, and promptly notified Rogue in writing that its exhibition of the Film infringed Fox’s copyright in the Film. Rogue did not respond, and, on information and belief, proceeded with its scheduled exhibition.”

“Since 2010, Fox has repeatedly warned Rogue that any further exhibitions could subject Rogue to copyright liability. Despite these warnings, Rogue has refused to cease its infringing conduct”

The Rogue Theatre is currently promoting yet another screening of the Rocky Horror Picture Show on October 25 and 26. When Fox found out last month it sent letters to the theater’s president, directors, and secretary, ordering them to cease and desist from their planned unauthorized screening. There was no response.

The movie studio subsequently felt it had no other option than to ask the court to stop the screenings and award $150,000 in statutory damages plus all loss in profits.

“[Fox demands] damages in an amount sufficient to fairly compensate it for the injury it has sustained, plus all the profits attributable to Rogue’s infringement of the copyright in the Film, and further that the amount of the monetary award granted herein be increased by $150,000 in view of the willful and deliberate nature of Rogue’s unlawful conduct.”

For Fox the Rocky Horror Picture Show is certainly an asset worth protecting. With a budget of $1.4 million the movie generated $175 million in box office revenue, even without the sums generated from Rogue’s unauthorized screenings.