BitTorrent Inc. Doesn’t Care About Your Privacy, Not Always 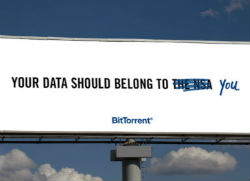 This week BitTorrent Inc. surprised friend and foe with a brilliant marketing campaign.

The company, known for the popular file-sharing applications uTorrent and BitTorrent, put up shocking billboards in three major metropolitan areas.

One of the slogans displayed the spooky message “Your Data Should Belong To The NSA.” After a few days this billboard was updated, striking The NSA while adding You.

In a blog post BitTorrent’s marketing president Matt Mason later explained that the company wanted to wake the public up, alerting them to the fact that they have the power to do something about the gross rights violations that were all over the news lately.

“We’ve chosen to accept surveillance culture: the right of security agencies to violate the Fourth Amendment; to see and store data as they see fit. But these things are just that. They’re choices. And these choices belong to us,” Mason wrote.

According to Mason privacy is one of the core values of BitTorrent and a means to get away from nasty government surveillance.

“We’re a company founded on a few simple core values. Uphold user privacy, and user control,” he writes, adding that “BitTorrent is a secure, distributed response to the challenge of data surveillance.”

While these words are music to the ears of many Internet users, they certainly don’t apply to all BitTorrent products.

In fact, regular BitTorrent transfers through uTorrent or other clients lack any form of privacy. People who share files in public, including BitTorrent’s artist bundles, display their IP-addresses to the rest of the world and are tracked by dozens of monitoring outfits.

This was also picked up by David Lowery, a well-known musician and respected anti-piracy advocate in the music industry. Lowery was quick to highlight the privacy aspect in an article on the Trichordist where he slammed BitTorrent for not understanding their own technology.

Backing up his argument, Lowery goes on to list the IP-addresses of a few dozens downloaders who were sharing his work via BitTorrent, many using the software provided by the San Francisco company.

BitTorrent does know its own technology of course, but we have to agree that the company’s messaging is confusing to say the least. Yes, BitTorrent released a great Sync application earlier this year, which allows people to run a private and secure backup service. But the general public associates BitTorrent with something entirely different – public downloads.

The billboard campaign and media commentary the company put out this week made no mention of this distinction. This is unfortunate, and perhaps a bit misleading. Not least because more than a quarter million torrent users have been sued in the U.S. alone because it’s so easy to monitor downloaders.

It becomes even more painful when we bring in the fact that BitTorrent refused to accept advertisements from a company that wanted to offer BitTorrent users a bit more privacy.

Earlier this year the company refused to run ads for TorGuard, because the VPN-service was considered to be “high risk”. The VPN service would only be welcome when it changed its name, logo, and removed all references to “BitTorrent,” “torrent” and uTorrent from its website.

For a business that claims to have privacy as one of its core values, this is a rather odd stance. But perhaps the privacy principle is only applied selectively, whenever it fits the company’s business interests.