Otherwise known as the Stop Online Piracy Act, SOPA would have enabled U.S. authorities to have allegedly infringing websites blocked at the DNS level, thereby rendering them inaccessible.

In 2012 the proposals were met with outrage, especially by those in the tech community who feared that meddling with the very systems that keep the Internet running would eventually end in disaster.

The legislation never passed but nonetheless over the past three years many hundreds of websites have been blocked around the world. In fact, in some recent cases in the United States entertainment industry companies have achieved some of the things they claimed to need SOPA for.

So did any of this “break the Internet”? According to a piece published in The Hill this week, absolutely not.

“[Policymakers] should not accept the falsehood that blocking a website or taking other actions to shut down infringing sites equates to an assault on the security and reliability of the Internet as a whole,” wrote Daniel Castro, vice president of the Information Technology and Innovation Foundation.

“Instead, they should recognize that selective targeting of websites dedicated to infringement is an effective strategy to combat piracy, and encourage the recording industry, the film industry and online intermediaries to work in partnership to block, shut down and cut off revenue to these websites wherever possible.”

Mr Castro probably feels the Internet is unaffected by blocking since every website he accesses works just fine. However, new data on blocking activity elsewhere presents an altogether more worrying state of affairs.

In 2013, Russia activated a streamlined mechanism for having sites blocked at the ISP level. As a result many hundreds of sites have been rendered inaccessible to the public and some, such as torrent site RUTracker, are now facing the possibility of being blocked forever. But how has this affected the wider Internet?

Well, according to data obtained by web-blocking watchdog RUBlacklist, those doing the blocking in Russia are using their powers to the full while having little concern for collateral damage. As a result more than a third of all IP addresses on the country’s website blocking list belong not to illegal services, but to US-based CDN company Cloudflare.

RUBlacklist says the numbers are significant. As of October 5, 2015, a total of 8,284 IP addresses were on the national blocklist but a head-shaking 2,831 of them – more than 34% – have been registered to Cloudflare. 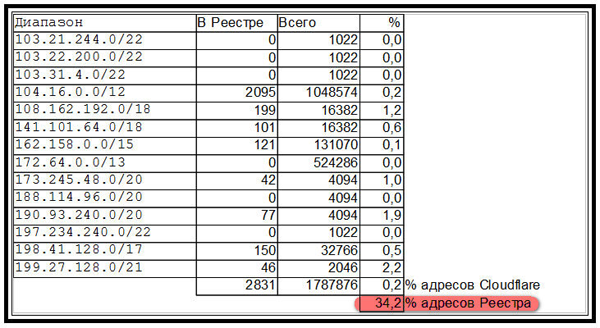 The problem is due to how CDNs (Content Delivery Networks) like Cloudflare are setup. Instead of a site’s own IP address facing the world, once Cloudflare is deployed it is the service’s IP addresses that are seen in public.

Sadly, when a complaint is filed at the Moscow City Court, no one really cares whether the IP addresses belong to a legitimate service or not, or whether they stay on the blacklist even after they fall out of use.

“Roskomnadzor simply fills and fills its database of banned IP-addresses, risking blocking dozens if not hundreds of thousands of innocent websites,” RUBlacklist explains.

Of course, the blocking of Cloudflare and its customers is nothing new. Earlier this year innocent websites were blocked in the UK by ISP Sky simply because a Pirate Bay proxy was hosted behind the same IP-address.

But while the Sky problems were probably down to human error, the current over-blocking situation in Russia could have been avoided if concerns had been considered in December 2013.

People knew Cloudflare was at risk then, yet no one appears to have taken the warnings seriously. In April 2014, Roskomnadzor admitted there was a problem but simply warned people not to use the service since Cloudflare didn’t respond to correspondence on the matter.

“CloudFlare representatives refused to cooperate and did not respond to the formal notices of Roskomnadzor,” the watchdog explained.

“In the absence of a reaction from CloudFlare many conscientious Internet resources using the CDN-service will be blocked by ISPs in Russia.”

But as the finger-pointing continues the people who really suffer are regular Internet users themselves. Fears that Joe Public would be caught in the copyright crossfire were just the kind of concerns that came to the forefront and fueled the SOPA protests.

Blocking might not have broken the Internet yet, but already parts of it need fixing. And, despite it all, the pirates continue their business largely as before.