Online Piracy Drops in Australia, Thanks to Netflix

Video streaming giant Netflix sees itself as one of the most prominent competitors to the many pirate sites and services that offer video content illegally.

In recent years the company revealed that it has seen a consistent piracy drop in many countries soon after launch.

This Netflix effect now also appears to have hit Australia. The video streaming service launched earlier this year and new statistics released by the IP Awareness Foundation show that online piracy has decreased since.

According to the most recent survey 25 percent of Australian adults aged 18-64 are self-confessed pirates, down from 29 percent in the previous year. This is the first decrease since the piracy boom started.

The drop is visible among both casual and persistent pirates, with the largest drop in the second group, as shown in the pie charts below. 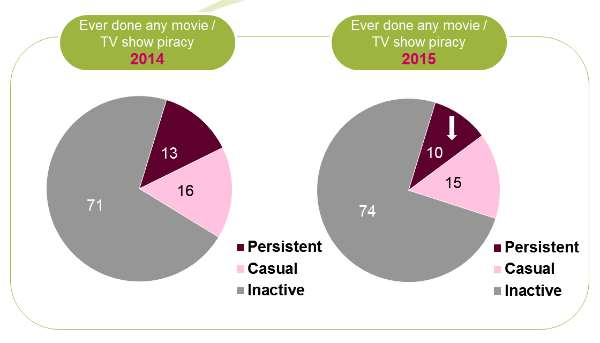 It’s not all good news for copyright holders though. Among the remaining persistent pirates 40 percent say they are pirating more than last year.

In part the piracy decline can be attributed to Netflix. Without a direct causal relationship it’s tricky to draw strong conclusions, but the survey respondents who say they are pirating less cite legal alternatives as the main reason.

Moral considerations were also mentioned by the respondents, as well as legal ramifications. Overall, however, legal options have the biggest impact according to consumers.

IP Awareness Executive Director Lori Flekser is happy with the positive change but also tames some of the optimism. According to her a combination of positive and negative reinforcement is required to properly address the issue.

“Piracy has always needed a range of measures to tackle the problem as we all know there is no silver bullet,” Flesker says.

“This fall in piracy rates is definitely largely attributable to the combination of the government’s new legislation, plus the ongoing efforts of the creative industries to continue delivering great content at accessible prices to Australian consumers,” she adds.

Piracy has been a hot topic in Australia and there are plans to block websites and warn frequent infringers in the near future. Time will tell whether this help to continue the current downward piracy trend.