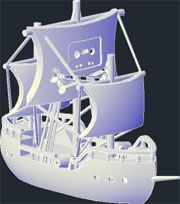 During the last 20 years inkjet printers made an unholy mess of the short-run commercial print guy’s business, enabling just about anyone to print on anything from paper to plastics with a relatively tiny outlay.

During the next 20 years the 3D printer will be the bogeyman affecting industries both far and wide and large and small, by giving the man in the street the ability to print physical objects as easily as he can print a family photo today.

Downloading a car – or a pair of sneakers – will be entirely possible, although Ford and Nike won’t be particularly happy if people use their designs to do so. However, if The Pirate Bay have their way, that’s exactly what will happen.

“We believe that the next step in copying will be made from digital form into physical form. It will be physical objects. Or as we decided to call them: Physibles,” said The Pirate Bay earlier this year announcing a new 3D printing section of their site.

But The Pirate Bay aren’t the only ones predicting a 3D printing free-for-all, and already steps are being taken to ensure that people of tomorrow are denied the freedom to print whatever they want.

A new patent, issued this week by the U.S. Patent & Trademark Office and titled ‘Manufacturing control system’, describes a system whereby 3D printer-like machines (the patent actually covers additive, subtractive, extrusion, melting, solidification, and other types of manufacturing) will have to obtain authorization before they are allowed to print items requested by the user.

In a nutshell, a digital fingerprint of “restricted items” will be held externally and printers will be required to compare the plans of the item they’re being asked to print against those in a database. If there’s a match, printing will be disallowed or restricted. Japanese rightsholders are already pushing an ISP-level version of the same kind of system to nuke unauthorized music uploads.

“This is an attempt to assert ownership over DRM for 3D printing. It’s ‘Let’s use DRM to stop unauthorized copying of things’,” says Michael Weinberg, a staff lawyer at the non-profit Public Knowledge, who reviewed the patent for Technology Review.

While owners of intellectual property might welcome such a system, the patent – which is registered to Intellectual Ventures, a patent-hoarding company run by former Microsoft CTO Nathan Myhrvold – also covers even more controversial items.

In their announcement in January, The Pirate Bay saw a situation where hunger could be eliminated. “We’ll be able to print food for hungry people. We’ll be able to share not only a recipe, but the full meal,” they said.

But even that eventuality could be restricted. As well as more predictable substances such as ABS and polycarbonate, the printer DRM patent also covers edible substances. It even includes skin.

Of course, the wonders of 3D printing don’t only exist to satisfy consumer demand for the latest products at the flick of a switch. They can be used for very human applications, such as helping this little girl get over a crippling disability and printing blood vessel networks for medical research.

That people are already trying to squeeze themselves between this wonderful technology and creative minds is a serious concern and bound to have an effect on its future development and application. However, for now nothing is forcing printer manufacturers to utilize the DRM, at least until they come under massive pressure from some of the most powerful product manufacturers in the world that is….