SOPA Is Back! … As a Ransomware Virus

The Stop Online Piracy ACT (SOPA) was a major threat to the Internet. The bill introduced draconian censorship tools for the Government and copyright holders, that worried the public and many key Internet companies including Reddit, Google and Wikipedia.

After months of protest, the bill was eventually killed off following the Internet Blackout earlier this year.

But that doesn’t mean SOPA is no longer a threat. This week ‘the bill’ was resurrected by a virus maker, who has been warning users of infected computers that their IP-address is on a blacklist after it was discovered distributing illegal content. 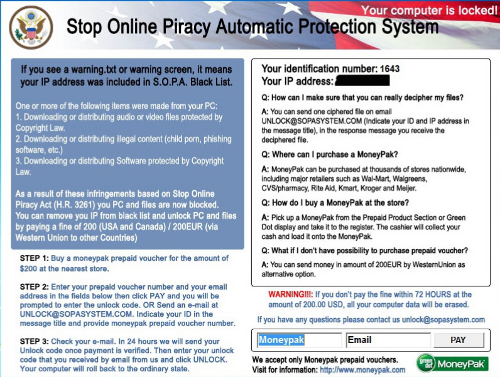 As a result, the SOPA virus holds all files on the host computer ransom.

“Your computer is locked!” the splash screen above warns, adding:

If you see a warning.txt or warning screen, it means your IP address was included in S.O.P.A. Black List. One or more of the following items were made from your PC:

As a result of these infringements based on Stop Online Piracy Act (H.R. 3261) your PC and files are now blocked.

The SOPA virus is so-called ransomware, meaning that it holds computers hostage and only promises to free data after victims hand over cash. In the U.S. and Canada people are instructed to pay with a MoneyPak prepaid voucher, and in other parts of the world they can use Western Union.

Those who don’t pay within three days are in trouble, the virus maker warns.

“WARNING!!!: If you don’t pay the fine within 72 HOURS at the amount of 200 USD, all your computer data will be erased.”

People who are affected should of course ignore all the above. Searching online for “Stop Online Piracy Automatic Protection System Removal”” is a better option, there are plenty of ways to defeat the resurrected SOPA and get your data back.