This morning the Piracy Analysis team at NetNames released a comprehensive report on the scope of online piracy.

Titled “Sizing the Piracy Universe,” the NBC Universal commissioned study maps the volume and prevalence of online piracy throughout the world.

The overall conclusion of the report is that, despite various anti-piracy policies and enforcement actions, piracy is hard to stop.

“The practice of infringement is tenacious and persistent. Despite some discrete instances of success in limiting infringement, the piracy universe not only persists in attracting more users year on year but hungrily consumes increasing amounts of bandwidth,” NetNames writes.

NetNames uses in-house research and several third-party resources to draw its conclusions. The report estimates the number of copyright infringers on the Internet, the amount of data these people share across various platforms, and signals various trends.

One of the most visible trends is that direct download “cyberlockers” have lost many visitors since late 2011, while other platforms expanded their user bases.

In total, the number of people downloading or streaming unauthorized content via the Internet increased more than 3%.

As can be seen in the table below, most pirates use direct download and torrent sites, both with slightly above 200 million unique users a month. NetNames excluded users who never download any infringing content, which they estimates at 4% for BitTorrent and 8% for direct download sites.

Piracy ecosystem as of January 2013 (large) 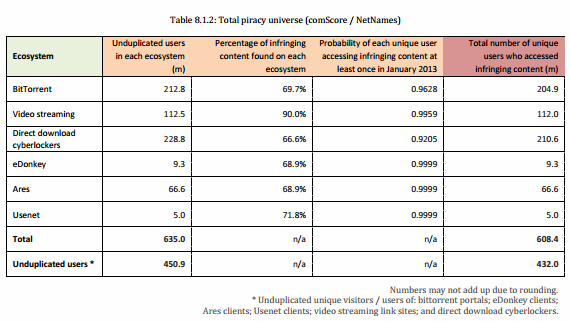 Based on data from Cisco, NetNames also estimates the total bandwidth generated by Internet pirates in Europe, North America and Asia-Pacific. In these key regions Internet piracy accounted for 9,567 petabytes of data, meaning that global traffic well exceeds 10,000 petabytes.

In terms of bandwidth BitTorrent is the absolute leader, which makes sense since users both download and upload files, generating twice as much traffic.

Pirates who used cyberlockers downloaded relatively little content, 338 petabytes of data per month in 2012, down 54.7% compared to 2010. In total, the report estimates that nearly a quarter of all Internet traffic is piracy related.

The report also observes several regional trends. For example, direct download sites are the preferred download service in the Asia-Pacific region, while BitTorrent is most used in Europe and North America.

Overall, NetNames’ research provides a unique overview of the scope of online piracy. Without a doubt, the MPAA and other anti-piracy forces will leave no opportunity unused to turn it to their advantage.