Over the past several weeks, numerous rightsholders have filed submissions to the European Commission hoping that sites and services will be added to the upcoming ‘Counterfeit and Piracy Watch List’.

Today, we look at the submission of Spanish football league LaLiga which has been fighting a prolonged battle against pirates for several years. Regular site-blocking, dynamic injunctions targeting IPTV services and criminal investigations are all part of its toolkit.

In a call for action sent to the EC, LaLiga calls out many pirate IPTV services and illegal streaming sites that make live matches available to the public in breach of copyright. Those detailed in the two images below are undoubtedly illegal services. In at least one case, there are breaches of trademark law too.

While these are all straightforward cases, LaLiga goes further by attempting to paint software tools as infringing too.

To access any kind of video content stored either on the internet or a local machine, users need some kind of software to facilitate that. From a basic web browser to dedicated media players such as VLC, many tools will do the job, but when users want to access IPTV streams (Internet Protocol Television), they often turn to tools designed for that specific purpose.

Many tools are available, some free (open source or supported by advertising) and others where a small fee is required. What the vast majority have in common, however, is that they are just video players and mostly come with no content installed ‘out of the box’. When they do carry infringing content, rightsholders almost universally call them ‘pirate streaming apps’, not IPTV players.

Of course, in common with other content-agnostic tools such as VLC, most IPTV players are capable of playing both legal and illegal content. Crucially, that choice is left to the user.

If tools come bundled with an infringing channel playlist (usually in the .m3u/.m3u8 format), that would render them immediately illegal and open up serious liability for their operators. Most developers avoid doing so, but LaLiga believes their software tools are still illegal, even when they carry no infringing TV content.

“The chart below [truncated by TF to include all with more than 500,000 downloads] includes the most relevant player applications, as of the date of this contribution, which amounts to a total of eight-five (85). All of them have the same characteristics and are being monitored by LaLiga. The millions of downloads of all these applications describe the serious threat they pose,” LaLiga writes. 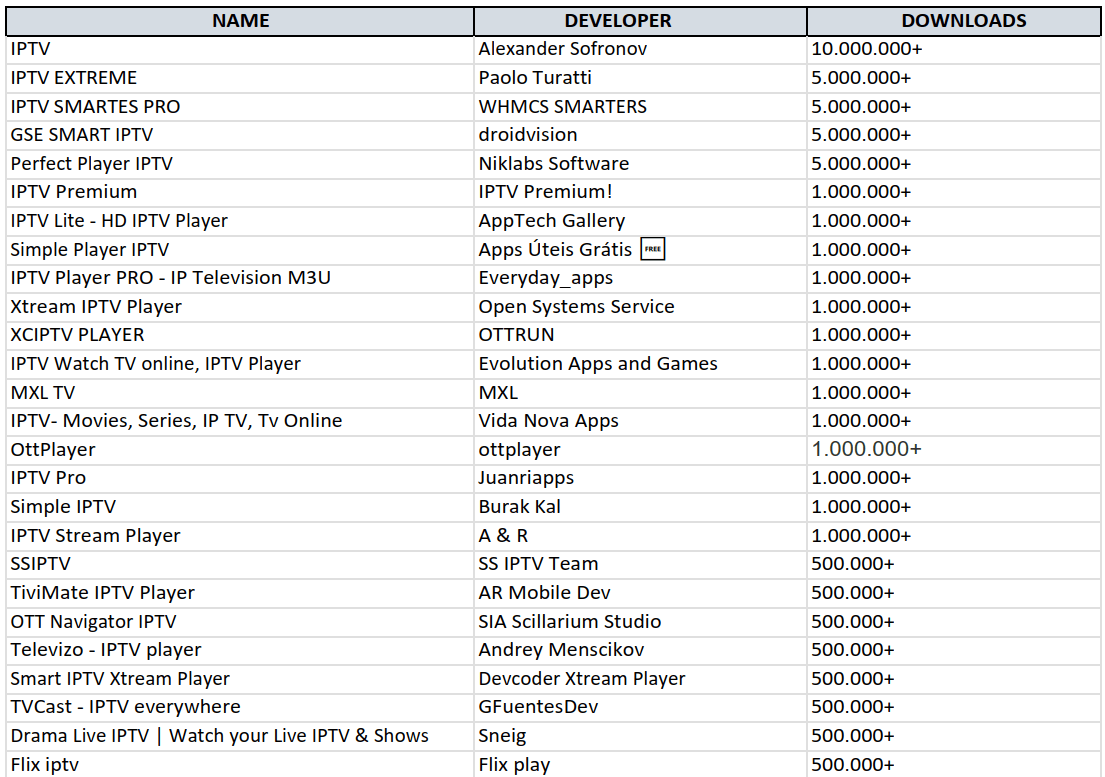 “It is important to note that all of these player applications allow the consumption of an innumerable amount of audiovisual contents such as sports, movies, series TV channels, etc. In other words, this problem affects the entire audiovisual and entertainment industry in general,” LaLiga adds, carefully choosing its words.

Indeed, if we look at all applications that “allow the consumption of an innumerable amount of audiovisual contents” we could start with Chrome, Firefox and Safari, then add Windows Media Player and VLC. The big question is, does LaLiga present any additional facts to back up its infringement claims?

Because it’s the most-downloaded IPTV player on LaLiga’s list and presumably a good example of an infringing app, LaLiga highlights the ‘IPTV’ app by developer Alexander Sofronov. It’s available here on Google Play but was previously available via another URL.

In support of its case for a crackdown on this ‘IPTV’ app, LaLiga provides the following screenshot: 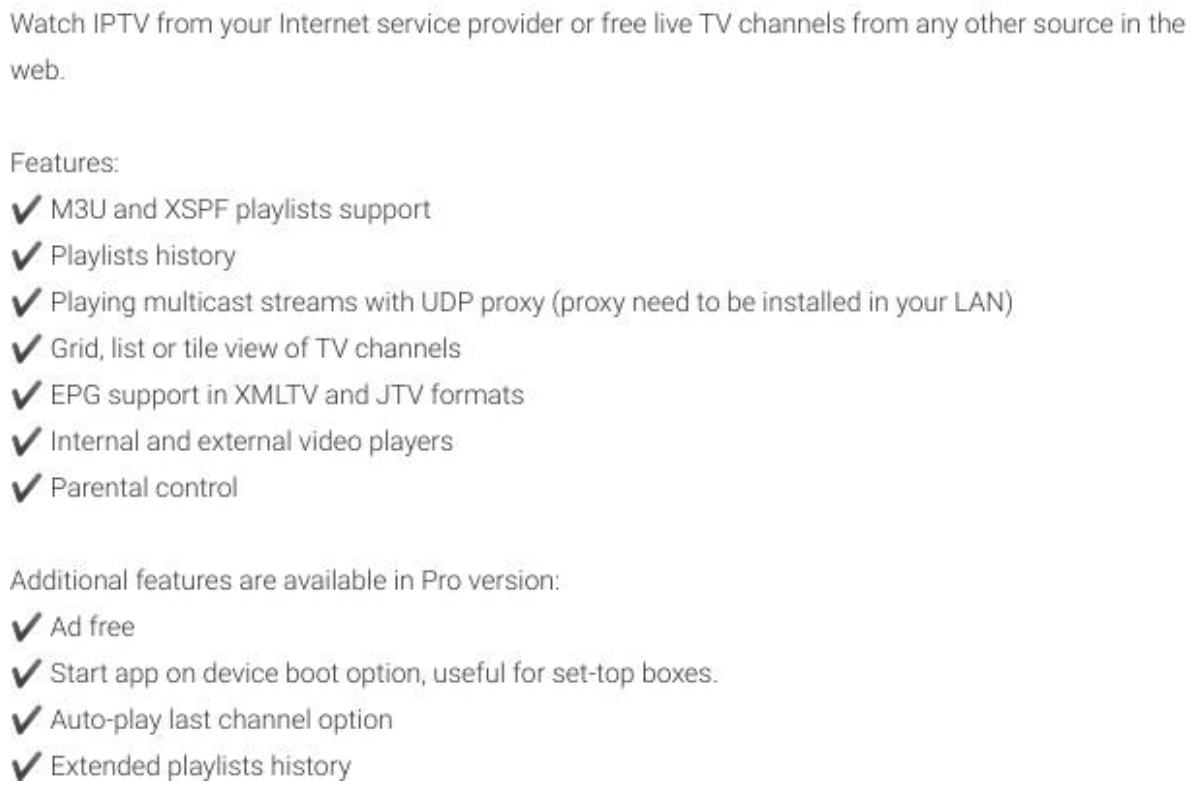 That was captured when the ‘IPTV’ app was available at its previously-available Google Play URL (copy here via Wayback Machine). This is notable because, for reasons known only to LaLiga, the football league decided to crop out the most important aspect of the ‘IPTV’ app – it carries no channels and no playlist, so users have to supply their own. (see the final line on the uncropped version) 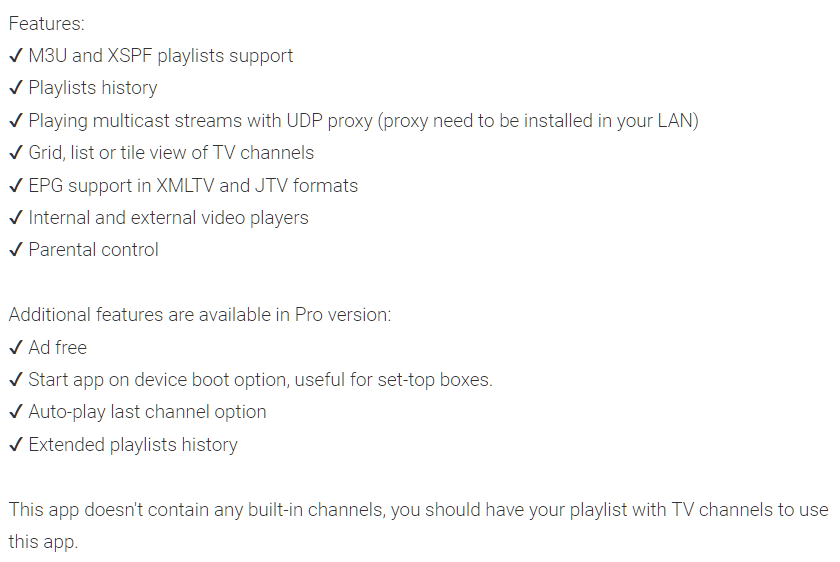 The European Commission will presumably carry out its own independent checks against all of the apps in the LaLiga list and if they do come with any infringing playlists or TV channels, action will be required. However, the top few listed by the football league don’t seem to fall into that category.

We haven’t tested them all but if any ‘player’ in the list offers infringing content out of the box, a simple DMCA takedown to Google will do the trick meaning that help from the European Commission is not needed. That being said, LaLiga is offering its own demonstrations of why these applications are illegal.

“LaLiga has powerful technological tools developed internally and a team of experts working on a daily basis to detect these illegal applications. Naturally, LaLiga has much more extensive and detailed technical information than that included in this contribution, which could be shown to the Europan Commission if required,” the league concludes.

Finally, it’s worth pointing out that the way apps are promoted can play a part in determining their legality. If developers promote their tools for infringing purposes, there might be a case to answer, even in the absence of infringing playlists.

For example, in the case of the ‘IPTV’ app, it is currently marketed with screenshots on Google Play featuring BBC channels. That is probably less problematic since publicly available playlists use the BBC’s URLs which can be legally accessed by those with a UK TV license and UK IP address. However, if developers present lists of Hollywood movies or subscription channels, that would be much harder to argue away.

LaLiga’s full submission, including all of the “illegal” IPTV players can be found here (pdf)