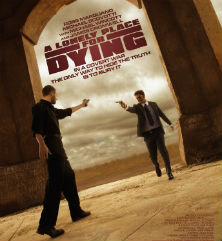 VODO, the BitTorrent-powered distribution network for independent films, has released a few dozen high-quality movies in the past year but last month saw the premiere of a particularly important title.

Cold War spy thriller A Lonely Place For Dying boasts James Cromwell as Executive Producer, a Hollywood veteran with movies such as LA Confidential, The Green Mile and Secretariat under his belt.

But the talent doesn’t stop there. With actor Michael Wincott on board (The Crow, The Assassination of Richard Nixon, not to mention appearances in dozens of other movies and videogame Halo2) and first-time Director Justin Eugene Evans, the seeds to a great movie had been planted.

On July 1st 2011 those creative seeds were converted to BitTorrent seeds courtesy of VODO and part one of the movie was released out into the wild. Now, just over one month later, A Lonely Place For Dying is proving a smash hit online.

At the time of writing it has climbed to 3rd position in the VODO charts after amassing more than 1 million official downloads. Only Pioneer One and Zenith have achieved more in total but both have been available for several months already and in multiple episodes.

“Achieving over one million downloads on VODO in one month has exceeded our wildest expectations,” director Justin Eugene Evans told TorrentFreak.

“We’ve had well over one million Twitter impressions as well. We’re hoping this evidence will sufficiently convince an analog industry that this film has tremendous potential.”

In addition to huge download stats, for the last couple of weeks A Lonely Place For Dying has also been the best-seeded movie available on BitTorrent worldwide, even beating the likes of Source Code and X-Men First Class.

“You just listed movies with budgets of 32 million and 150 million respectively,” says Evans. “Our budget is only 200 grand. Conventional Wisdom would dictate the opposite; that when a microbudget movie is forced to compete with all the world’s torrented movies we’d be drowned out.

“I’m hoping this proves that there is no direct link between budget and craftsmanship. However, this method only works if the film is rock solid. It doesn’t have to be perfect (nothing is) but if the work lacks compelling characters, quality dialogue and the overall product is not well crafted this marketing tactic will fall on its face.”

This level of exposure is of particular importance to the creators of the movie. Rather than sell the rights to a Hollywood studio they chose to keep control themselves and generate funding through the BitTorrent community instead.

The movie is now undergoing a serialized release on VODO (there will be 5 episodes in total) in the hope that enough donations can be secured to fund a full theatrical release next year, although Evans says current levels of donations are disappointing.

“If every viewer gave us $1.00 we’d have over 1 million right now. That would be enough to reward every cast & crew member, every investor would make a reasonable profit, I’d be paid for my time and we’d have enough left over to make another feature film.”

VODO and BitTorrent aside, July was a great month for A Lonely Place For Dying. The movie won four awards at the Van Wert Independent Film Festival including Best Picture, Best Director, Best Actor and Best Editing.

Of its 40 official festival selections and 45 award nominations, A Lonely Place For Dying has now won an impressive 23 awards including 15 for Best Picture.

Those who still haven’t seen the first part of the movie can download it here. Don’t forget to throw in a few bucks if you enjoyed it.