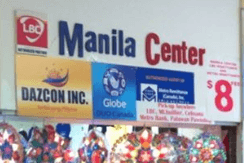 ABS-CBN, the largest media and entertainment company in the Philippines, is continuing its legal campaign against piracy.

Over the past several years, the company has singled out dozens of streaming sites that offer access to ‘Pinoy’ content without permission, both in the US and abroad.

This week it filed a new case in Canada, that’s different from the ones we’ve seen before. Instead of going after site operators, ABS-CBN is suing a ‘bricks-and-mortar’ store located at the Kennedy Square Mall in Brampton, Ontario.

The vendor, incorporated as Dazcon Inc, reportedly sold streaming boxes that allowed users to access movies and TV-shows. The devices in question are BuzzTV boxes pre-configured with a pirate add-on.

Dazcon appears to be a small vendor, also known as “Manila Center,” that offers a variety of products and services oriented at Philipino customers in Ontario. It’s also an agent for LBC Express, for example, which offers money and mail services to the Philipines. 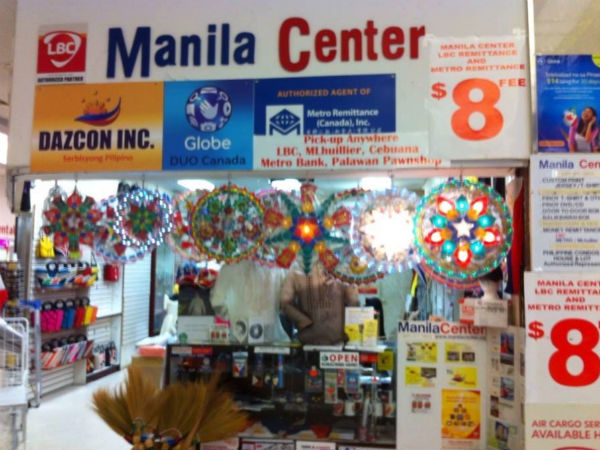 A copy of the complaint, obtained by TorrentFreak, shows that the vendor is accused of selling devices pre-loaded with copyrighted works. In addition, it also offered devices that were able to circumvent ABS-CBN’s technical protection measures.

“In furtherance of this scheme, the Defendants, individually and/or collectively, sold set-top boxes for the primary purpose of circumventing the Plaintiffs’ TPMS and permitting unauthorized access to the ABS-CBN Copyrighted Works,” the complaint reads.

“As a consequence of the actions of the Defendants, the public is enabled to receive the ABS-CBN Copyrighted Works via circumvention of the Plaintiffs’ encryption, all without the authority, license or permission of any of the Plaintiffs,” it adds.

ABS-CBN alleges that Dazcon manually installed an add-on to the set-top boxes which made the infringements possible. The name of this offending add-on is not mentioned in the complaint. 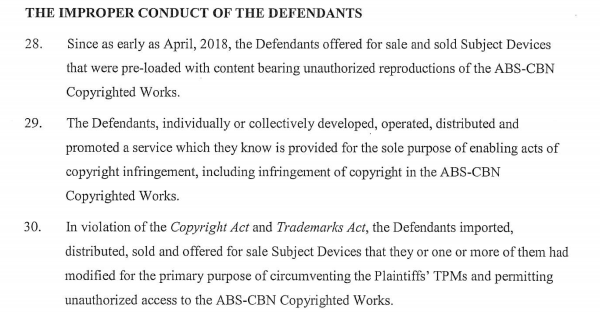 In addition to the CAD$5 million in damages, the media company also requests an injunction preventing the vendor from engaging in any copyright infringement of its works in the future, as well as an order granting it custody of the set-top boxes.

Interestingly, the vendor in question was outed by ABS-CBN’s own customers, the company reports while warning others to remain vigilant.

“Beware of these operations that are not licensed or affiliated in any way with ABS-CBN,” says Elisha Lawrence the company’s Head of Global Anti-Piracy.

“If you have any suspicions of other boxes being sold that are not affiliated with ABS-CBN, please call the ABS-CBN office in the U.S. or Canada to verify. We will continue to protect customers by shutting these operations down.”

While the requested amount of damages may appear quite high, history has shown that this is not unusual for the media giant.

In the US, the company won $1 million judgments against 19 pirate sites last years, and earlier it won a $10 million judgment against the operator of another small streaming site. Whether any of these damages were actually paid is unknown.

A copy of ABS-CBN’s complaint against Dazcon Inc is available here (pdf).