In January, a coalition of Canadian companies called on local telecoms regulator CRTC to implement a website-blocking regime in Canada.

The coalition, Fairplay Canada, is a collection of organizations and companies with ties to the entertainment industries and includes Bell, Cineplex, Directors Guild of Canada, Maple Leaf Sports and Entertainment, Movie Theatre Association of Canada, and Rogers Media. Its stated aim is to address Canada’s online piracy problems.

While CTRC reviews FairPlay Canada’s plans, the coalition has been seeking to drum up support for the blocking regime, encouraging a diverse range of supporters to send submissions endorsing the project. Of course, building a united front among like-minded groups is nothing out of the ordinary but a situation just uncovered by Canadian law Professor Micheal Geist, one of the most vocal opponents of the proposed scheme, is bound to raise eyebrows.

Geist discovered a submission by Brian Hutchings, who works as Vice-President, Administration at Brock University in Ontario. Dated March 22, 2018, it notes that one of the university’s most sought-after programs is Sports Management, which helps Brock’s students to become “the lifeblood” of Canada’s sport and entertainment industries.

“Our University is deeply alarmed at how piracy is eroding an industry that employs so many of our co-op students and graduates. Piracy is a serious, pervasive threat that steals creativity, undermines investment in content development and threatens the survival of an industry that is also part of our national identity,” the submission reads.

“Brock ardently supports the FairPlay Canada coalition of more than 25 organizations involved in every aspect of Canada’s film, TV, radio, sports entertainment and music industries. Specifically, we support the coalition’s request that the CRTC introduce rules that would disable access in Canada to the most egregious piracy sites, similar to measures that have been taken in the UK, France and Australia. We are committed to assist the members of the coalition and the CRTC in eliminating the theft of digital content.”

The letter leaves no doubt that Brock University as a whole stands side-by-side with Fairplay Canada but according to a subsequent submission signed by Michelle Webber, President, Brock University Faculty Association (BUFA), nothing could be further from the truth.

Noting that BUFA unanimously supports the position of the Canadian Association of University Teachers which opposes the FairPlay proposal, Webber adds that BUFA stands in opposition to the submission by Brian Hutchings on behalf of Brock University.

“Vice President Hutching’s intervention was undertaken without consultation with the wider Brock University community, including faculty, librarians, and Senate; therefore, his submission should not be seen as indicative of the views of Brock University as a whole.”

BUFA goes on to stress the importance of an open Internet to researchers and educators while raising concerns that the blocking proposals could threaten the principles of net neutrality in Canada.

While the undermining of Hutching’s position is embarrassing enough, via access to information laws Geist has also been able to reveal the chain of events that prompted the Vice-President to write a letter of support on behalf of the whole university.

It began with an email sent by former Brock professor Cheri Bradish to Mark Milliere, TSN’s Senior Vice President and General Manager, with Hutchings copied in. The idea was to connect the pair, with the suggestion that supporting the site-blocking plan would help to mitigate the threat to “future work options” for students. 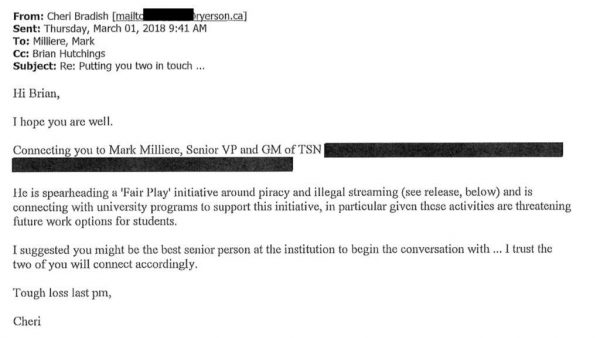 What followed was a direct email from Mark Milliere to Brian Hutchings, in which the former laid out the contributions his company makes to the university, while again suggesting that support for site-blocking would be in the long-term interests of students seeking employment in the industry.

On March 23, Milliere wrote to Hutchings again, thanking him for “a terrific letter” and stating that “If you need anything from TSN, just ask.”

This isn’t the first time that Bell has asked those beholden to the company to support its site-blocking plans.

Back in February it was revealed that the company had asked its own employees to participate in the site-blocking submission process, without necessarily revealing their affiliations with the company.