Accused of Movie Piracy, Senior Citizen Kicked Out of Theater

While recording a movie strictly for personal use is entirely legal in UK cinemas, the same definitely cannot be said about the United States. Recording or ‘camming’ a movie in the U.S. can result in jail-time, particularly if the activity is connected to subsequent bootlegging or illegal online distribution.

This strict approach is the result of intense Hollywood lobbying during the last decade, and there can be few cinema-goers today who haven’t been touched by the results. Bag searches and night-vision goggles are now used to deter ‘cammers’, coupled with industry-funded rewards programs aimed at vigilant theater workers.

This climate of fear hasn’t stopped cammed copies of movies turning up online, but it has sucked in a few innocent victims over the years. If a new report from Utah is to be believed, another one can now be added to the list.

According to Provo resident Enos Ledezma, his elderly parents go to the movies several times a week. They find it both entertaining and practical, since it allows them to brush up on their English.

However, this past weekend things weren’t so enjoyable when Ledezma’s mother stood accused of illegally camming a movie in a Cinemark theater.

Ledezma says that part-way through the movie his father had to leave, but before doing so handed his wife a “brick, slider-type” cellphone. She apparently put the device in her pocket, but shortly after was confronted by not only a Cinemark employee, but also two police officers.

The trio reportedly informed the woman she had been seen recording the movie and would therefore have to leave, but due to her poor grasp of English the woman didn’t fully understand what was going on. Attempting to hand over her phone for inspection didn’t ease the situation either.

The woman was eventually ejected from the theater and not allowed to watch the remainder of the film, even after the false allegations were withdrawn.

Ledezma told KSL that it’s possible that another cinema-goer saw the theater-provided closed-captioning device next to his mother and presumed it was a bootlegging tool, but that was still no excuse for mistreating a regular customer.

While it seems unlikely that the woman broke the law (the police officers would have seen any footage by accessing her cellphone), it occurred to us that she may have broken Cinemark’s policy on using cellphones in the theater.

However, this somewhat amusing footage, filmed in a Cinemark theater by someone using a Nintendo DS, seems to clear up that cellphones are allowed, as long as they’re silent.

And here’s the thing. If anything, the footage from the DS in the clip above is likely to be better than that obtained from what appears to be an old cellphone. This kind of end result is definitely not a threat to the movie industry, even if the woman had been recording, which it appears she was not.

Interestingly and this case aside, Cinemark actually approaches the cellphone-in-theater problem in an innovative way. If visitors have a smartphone with the Cinemark app installed, switching over to CineMode darkens the screen for the duration of the movie. If that state is maintained right to the end, users can pick up rewards, such as a free drink. 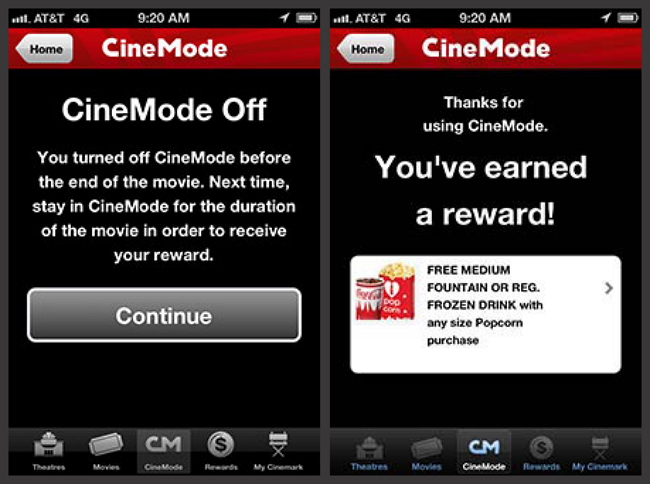 But even in the event Ledezma’s mother upgrades to an iPhone, it’s unlikely she’ll be taking advantage of the offer.

“At the moment, I have no intention of going back to that Cinemark. I’d rather drive 45 minutes to the Megaplex,” Ledezma concludes.

Camcording Piracy is Dropping, But Not In Russia