Adobe Says Piracy Down, But Pirates Still Love Their Software

There can be little doubt that Adobe products are popular with pirates. Variants of the company’s Photoshop software, for example, having been appearing on computers illegally for a quarter of a decade.

Then, whenever Adobe launches a new piece of software, there’s a mad panic to obtain ‘cracked’ versions, mainly so that users can avoid paying hundreds to thousands of dollars for the privilege of ownership.

To help combat this situation, two years ago Adobe announced that it would move away from boxed ‘retail’ products with a switch to a cloud-subscription model. Rather than demanding large up-front sums, the company presented their services for a few dollars per month, to help even the most budget-restricted not to pirate.

Last July 2014, Adobe reported success with the strategy, noting that piracy had fallen albeit by “hard to measure” amounts. In a conference call with investors, the company is again reporting success.

According to Adobe, at the end of Q3 2015 it had amassed 5.3 million subscribers of Cloud, up from the 2.3m subscribers reported in Q2 2014. In the last quarter alone overall revenues topped $1.21 billion.

“[Do] you feel like you’re recapturing maybe….casual pirates with Cloud, especially around that hobbyist level? I was just kind of curious on your thoughts there,” one investor questioned.

Adobe President and CEO Shantanu Narayen responded, noting that while new customers were coming on board, pirates who find lower prices more appealing were also being converted.

“The new seat adoption is definitely being driven both by creators who are entering the market as well as casual pirates who existed for whom the lower price of entry is far more attractive way to have legal software than not,” Narayen said.

“There’s no question about that, we hear that anecdotally all the time that people are pleased with the fact that they can have legitimate software.”

It’s often said that price and accessibility aside, one of the best ways to cope with piracy is to offer a superior service. Narayen says Adobe is doing just that with Cloud by offering unique features unavailable in ‘cracked’ software.

“As we’re delivering more Cloud based services, as you know the only way to use the mobile apps and share content between the mobile apps as well as our Creative Cloud, is by having a subscription. So I think that’s also why we see more creative sync and creative profile being used, that’s certainly driving that,” Narayen added.

While it is indeed quite difficult to measure the scale of piracy of Adobe products post retail, the company’s popularity with pirates is still very visible. As can be seen from the screenshot below of The Pirate Bay’s top 100 most popular software downloads, Adobe leads the list and takes four out of the top seven places. 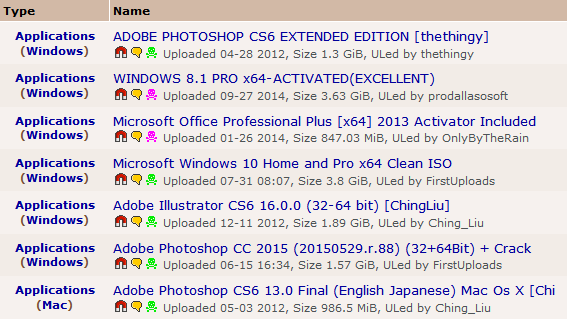 The top spot is taken by Adobe Photoshop CS6, a product that was launched three years ago but is still proving a smash hit. However, Adobe feels that it’s CS6 users that are the prime candidates for migration to Creative Cloud.

“The CS6 base continues to be a base that we think is ripe for migration to the Creative Cloud and we’re clearly seeing signs of success in transitioning them from Creative Suite to Creative Cloud,” Narayen concludes.

With few competitors at the high end of the market, it’s likely that Photoshop CS6 will remain the most popular image editing software with pirates for the foreseeable future. For casual users it may even remain the most downloaded for a few years to come but for those desperate for cutting-edge power features, migrating to Creative Cloud may be the only viable option moving forward.