In recent years, unlicensed TV subscriptions have been flourishing, with hundreds of vendors offering virtually any channel imaginable for a small monthly fee.

This phenomenon has become a grave concern for entertainment industry outfits, who launched the global anti-piracy coalition ACE to counter the threat.

ACE has booked some successes in recent years, both through lawsuits and by reaching out to key players directly. Similarly, over in Europe, law enforcement agencies have brought down large-scale IPTV operations. However, despite these efforts, the problem persists.

This week, Canadian broadband management company Sandvine released a new report on the state of pirate IPTV subscriptions. The company gathered data in Canada, the United States, Europe, the Middle East, and North Africa, monitoring traffic from six major networks that have a total of 65 million fixed internet subscribers.

The company uses similar data to prepare its Internet traffic reports but in the most recent whitepaper it focuses specifically on pirate IPTV subscriptions.

The new data, collected last year from July to the end of September, show that 6.9% of U.S. subscribers accessed pirate IPTV subscriptions. In Canada, this is even more prevalent, 9.3% of all sampled subscribers. 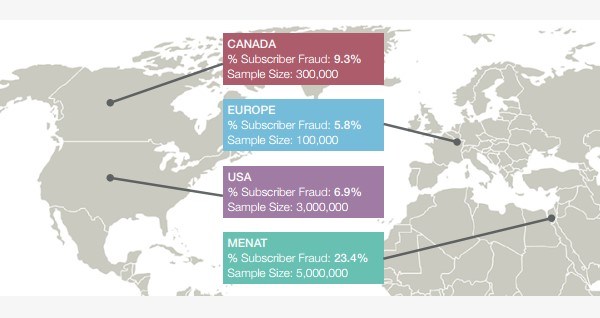 In both countries, the percentages have increased significantly compared to the previous measurement from 2018. However, they are substantially lower than in the Middle East, North Africa, and Turkey (MENAT).

Of all subscribers in the MENAT region, 23.4% could be linked to pirate IPTV services. According to Sandvine, this is in part because the availability of legal services is more limited. In general, decreased availability triggers more piracy.

The Sandvine report also reports European IPTV data for the first time. It finds that, across its limited sample of 100,000 subscribers, 5.8% could be linked to pirate IPTV services. However, the company adds that this may go up during the football season.

Aside from the geographical popularity of these unauthorized IPTV platforms, Sandvine also looked at the devices people use to access these services. This shows that Amazon’s Fire TV Stick comes out on top, followed by the MAG box and general Android devices. 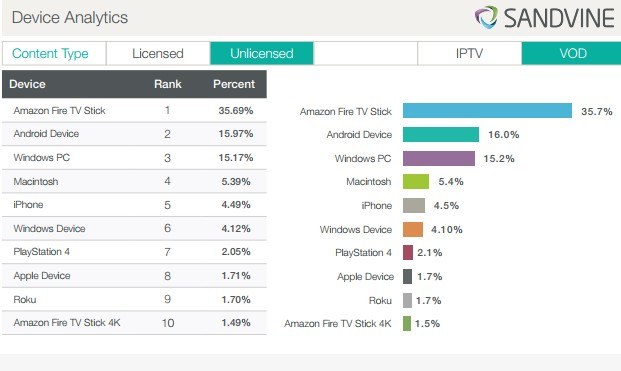 The fact that more than a third of all pirate IPTV subscriptions run through Amazon devices is noteworthy, as Amazon is a member of the ACE anti-piracy coalition, which tries to shut down this type of illicit activity.

The problem is, of course, that many perfectly legal technologies such as the Fire TV Stick and MAG box can also be used for illegal purposes. For example, the Fire TV Stick is also the third most popular device to access licensed services, behind Roku and operator-owned set-top boxes.

Finally, Sandvine also reports where most pirate IPTV servers are located. Surprisingly, the United States comes out on top with the most servers. However, looking at the actual bandwidth that’s transferred the US is in third place, behind Canada and the Czech Republic.

Overall, the whitepaper provides a unique insight into the pirate IPTV ecosystem. According to Sandvine its a clear and growing problem that’s well worth monitoring closely.

“While legal services like Netﬂix are still more widely adopted, subscription pirate television services have grown rapidly after having no adoption five years ago,” Sandvine notes.

Sandvine considers the reported data as a ﬂoor and not a ceiling. It doesn’t cover any on-demand piracy that takes place through these set-top boxes and doesn’t capture any streaming activity generated by traditional web browsers either.