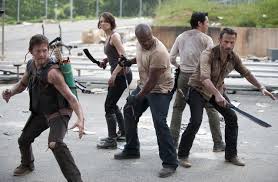 The Spoiling Dead Fans (TSD) is a community of hardcore The Walking Dead fans who have an even greater interest in the show than most. As their name suggests, they’re dedicated to obtaining all the latest information about the hit show – including information not yet in the public domain.

There have been suggestions recently that TSDF might reveal the identity of the individual who Negan killed with ‘Lucille’, his barbed wire covered baseball bat. As the cliff-hanger from the final episode of the last series, it’s pretty important to fans. As it turns out, it’s massively important to makers AMC too.

In a posting on their Facebook page this week, the operators of The Spoiling Dead told their 364,000 followers that AMC had contacted them with legal threats.

“After two years, AMC finally reached out to us! But it wasn’t a request not to post any info about the Lucille Victim or any type of friendly attempt at compromise, it was a cease and desist and a threat of a lawsuit by AMC Holdings, LLC’s attorney, Dennis Wilson. They say we can’t make any type of prediction about the Lucille Victim,” they wrote.

TorrentFreak has obtained a copy of the letter sent to TSDF in which AMC’s attorney at Kilpatrick Townsend & Stockton LLP lays down the law. Surprisingly for a show that hasn’t aired and potentially hasn’t even been made yet, the law being laid down is copyright in nature.

“AMC is aware that The Spoiling Dead Fans site is promoting your claim that you have received copyright protected, trade secret information about the most critical plot information in the unreleased next season of The Walking Dead,” the letter begins.

“You also state that you plan to distribute this purported highly confidential information despite your knowledge that such distribution, if the information is indeed accurate, is unauthorized and will greatly damage AMC, distributors of The Walking Dead as well as Walking Dead fans awaiting the new seasons’ release who wish to watch their favorite show unspoiled.”

AMC’s claim that any spoilers will amount to copyright infringement are somewhat eyebrow raising but according to the company this ground has been covered before.

“The release of plot summaries and particularly the types of crucial plot elements that you have stated you intend to release, have been found to constitute copyright infringement. Specifically, in Twin Peaks Productions vs. Publications International, the Court ruled that publishing a work that ‘recount[s] for its readers precisely the plot details’ of a fictional work constitutes copyright infringement.”

By citing a specific case one might conclude that AMC’s attorney is confident that the cases are similar, but reading the details casts more than just a little doubt on his claims.

The historical case in question involved the publication of a book by Publications International which covered in detail the first eight episodes of the 1990/91 TV series Twin Peaks. The big question was whether this use of copyright works was protected under fair use but in the end the court decided the publisher had gone too far.

The court found that the defendant’s “detailed recounting of the show’s plotlines went far beyond merely identifying their basic outline for the transformative purposes of comment or criticism” adding:

Because the plot synopses were so detailed, and in fact lifted many sections verbatim from the original scripts, the court found that defendant copied a substantial amount of plaintiff’s original works.

This hardly seems to mirror the situation playing out alongside a potential spoiler of an unaired episode of The Walking Dead. Presumably that spoiler can be achieved by saying a single name too, which by no stretch of the imagination amounts to a substantial part of any show.

Merits of the argument aside though, AMC doesn’t appear in any mood for messing around.

“By advertising the illegal disclosure of intricate plot details of an unreleased episode of The Walking Dead without authorization, you will willfully and intentionally impair the commercial viability of the show and thus AMC’s ability and incentive to continue to produce creative works such as The Walking Dead,” the company’s attorney continues.

“Should you fail to do so, AMC will file a lawsuit against you to enjoin your harmful illegal activities and seek to obtain money damages and injunctive relief to address your conduct.”

Whether the threats have any legal basis will probably never be known for sure but in the meantime The Spoiling Dead crew are having a pretty awful time of it. As a result they’ve decided not to take any chances.

“AMC has been harassing us for four days now by contacting our homes, our family members and our employers; even posting on this page and personal social media accounts. We are fans of this show just like you and aren’t a commercial operation that makes profit. We have families and careers to think about,” they explain.

“After consultation with our legal counsel, we have responded to AMC that the TSDF staff will not be posting our prediction on who gets Lucilled on any of our outlets.”

Speaking with TorrentFreak, ‘Shinyfirefly’ of TSDF said that while AMC insist that a disclosure about the ‘Lucille Victim’ was about to be made, no one from the company has provided that detail.

“[AMC} say that we claimed we received some illegal, protected information and that we said we were going to disclose the Lucille Victim based on that information. But they never identified WHERE the claim they say we made was. Even in our response to them we said we could not repudiate that claim because they didn’t identify it. They still haven’t. They are guessing,” Shinyfirefly said.

“It would be stupid of us to say something like that. All we ever said is that we were close to a confirmation and should be able to post who we thought it was in a couple weeks. There are lots of ways to confirm things and plenty of them legal.”

While the identity of the ‘Lucille Victim’ has always been a hot topic among Walking Dead fans, it’s now likely that following the legal threats from AMC the interest will leak over into the wider mainstream, thus making it even less likely it will remain a secret.

It’s understandable that AMC want to protect their storylines, but this is not pre-Internet 1980 and the days of secrets like Who Shot J.R.? are long gone.