Every day massive volumes of movies and TV shows are shared on the Internet without the permission of copyright holders.

While the majority will be viewed by speakers of the default language, the addition of subtitles allows content to be consumed across continents and on a global scale.

As a result, anti-piracy groups often claim that the existence of subtitles – whether from original sources or so-called ‘fansub’ creations – helps to drive up piracy levels everywhere. So, in response, several have taken legal measures in an effort to reduce their spread.

Of course, they can’t plug all of the holes but interestingly, it’s not just unlicensed consumers and platforms that can benefit from these leaks, as an incident reported on Twitter at the weekend revealed.

When translated, the tweet in question asks the following rhetorical question: “We agree that the inscription at the top is fan-made stuff? On Netflix. Well done Dybex.”

The screenshot is from the 1999 anime movie ‘City Hunter: Death of the Vicious Criminal Ryo Saeba‘ which in common with other anime titles is alternatively titled in various regions. However, what is unusual here is the caption at the top of the screen.

Rizon.net is an IRC (Internet Relay Chat) network that has been around for approximately 17 years. Anyone can set up a channel (denoted by hashtag #channelname) for free to discuss any topic they like, uncensored. So, in this case, the caption relates to the channel #anime101 on the Rizon network, which means that the subtitles used by Netflix were obtained from an unofficial and unlicensed source.

TF visited the #anime101 channel on Rizon to ask questions but we found only a ghost town. A single user was idling in the channel so as a result, no conversation was taking place. It seems likely that the channel has been all-but-dead for some time, which raises the question of exactly how old these subtitles are.

Momo, the Twitter user who made the discovery on Netflix France, ‘credited’ Dybex with the apparent subtitling ‘oversight’. Founded in the mid-nineties, Dybex is a company involved in the distribution of anime, originally on videotapes and DVD (City Hunter was available on this format just after the turn of the century) and more recently blu-ray and platforms like Netflix.

Thanks to Netflix having different libraries in various regions, the movie isn’t available everywhere. However, we managed to access the show this morning and tracked down the precise frame reported by Momo. The French subtitles were still there but as the image below shows, the marker indicating that they had been sourced from Rizon’s #anime101 had been removed. 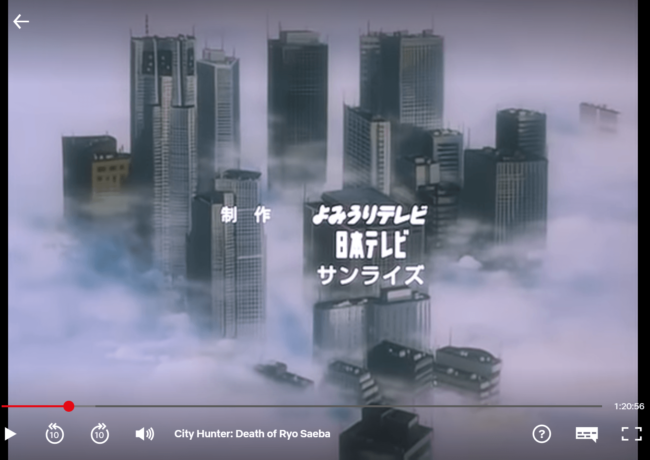 This development was also noted by Twitter user ViCklatereur who describes him/herself as an ‘audiovisual professional’. After confirming that the report by Momo was accurate at the weekend, now confirms that the ‘problem’ has been fixed.

“The problem is solved,” ViCklatereur writes. “The pirate channel irc address has disappeared.”

This isn’t the first time that ‘pirate’ subtitles have inadvertently found their way onto Netflix and other platforms. Back in 2012, subtitles created by fansub community “DivX Finland” were shown to Netflix viewers of Canadian-American science fiction series Andromeda.

More recently, Comcast-owned Sky Switzerland managed to show pirated subtitles alongside the hit series Chernobyl. These were sourced from fansubbing site Addic7ed.com, a platform that is blocked by ISPs in Australia for breaching copyright law.