In the last two months, dozens of anti-piracy groups, copyright lawyers and pro-copyright outfits have been targeted by a group of Internet ‘vigilantes’ under the flag of Operation Payback.

The operation began in September with DDoS assaults against the MPAA, RIAA and anti-piracy company AiPlex Software. The latter was picked as the first target because the outfit openly admitted to DDoSing several torrent sites, allegedly including The Pirate Bay.

Those DDoS attacks were later replicated against many other targets that have spoken out against piracy or for copyright, and last weekend the attacks came full circle when the RIAA website was taken down for three straight days.

Today, Anonymous continued their operation with a new target, and this time it’s a high profile one – The United States Copyright Office. The attack started at 3 PM GMT and took down the site for half an hour, after which it partially recovered. At the time of writing copyright.gov is very slow and barely accessible. 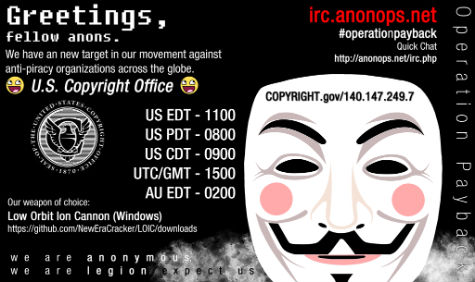 The United States Copyright Office is an official U.S. government body which is responsible for the country’s copyright registrations. In addition, the Office is also involved in administering copyright legislation and promoting copyright protection.

Similar to the UK’s Intellectual Property Office which was DDoSed last month, copyright.gov was chosen as a target because it is “Perpetuating the system that is allowing the exploitative usage of copyright and intellectual property,” according to Anonymous.

In addition to the DDoS attacks, Anonymous has also announced “real life” demonstrations in various countries to protest “against censorship and attempts from government entities to control the Internet.” These protests are scheduled to take place on November 5.