First, BitTorrent is a data transfer protocol, just like HTTP or FTP. It was invented more than a decade ago by Bram Cohen and one of its first public applications was shifting around completely legal recordings of music concerts.

Cohen made BitTorrent public – anyone could use it – and soon people all over the web were using it to shift files. Almost inevitably people used the protocol to transfer material protected by copyright, just as they had used – and continue to use – HTTP and FTP to do the same.

But while HTTP and FTP continued on their own, BitTorrent and creator Bram Cohen were later to become part of BitTorrent Inc., a company setup to create solutions for shifting files around the Internet. They own products such as file-transfer client uTorrent and the recently announced Dropbox alternative Sync.

What BitTorrent Inc. does not own, crucially, is the BitTorrent protocol itself. That creation is open source and anyone can use it, totally for free. 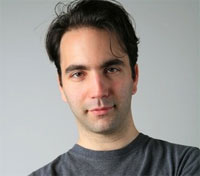 BitTorrent is a software tool, and just as I could foolishly break the law here by using HTTP to distribute text saying something maliciously untrue about someone I don’t like, anyone can use the BitTorrent protocol to do the same with copyrighted material. Tim Berners-Lee has no responsibility to stop me, and BitTorrent Inc. – well, you know where this is going.

But despite BitTorrent Inc’s lack of responsibility and entirely legal business model, yesterday a Hollywood exec told The Wrap that doing business with the company is like doing “a deal with the devil.”

Here’s why. In addition to their software tools, BitTorrent Inc. are increasingly teaming up with artists and movie creators who want to build awareness of their products and generate revenues through new distribution models. One of those partners is entertainment company Cinedigm, who are teaming up with BitTorrent Inc. to distribute an exclusive video promoting Arthur Newman, an upcoming romantic comedy starring Colin Firth and Emily Blunt.

The exec, who chose to comment anonymously, suggests that the partnership is bad for the movie industry and that by working with BitTorrent Inc., Cinedigm are somehow being manipulated.

“It’s great for BitTorrent and disingenuous of Cinedigm,” the executive said. “The fact of the matter is BitTorrent is in it for themselves, they’re not in it for the health of the industry and Cinedigm is being used as their pawn.”

The exec doesn’t offer any detail on the reasoning behind his comments, but one could argue that ALL companies makes deal for their own good, and Hollywood are no exception. They were supporters of SOPA and didn’t care much for its effects on the Internet. But of course, that’s their business and they are completely entitled to go about it in a legal manner of their choosing, just like BitTorrent Inc. are.

However, the suspicion here is that the exec is upset that this Cinedigm deal brings further respectability to BitTorrent Inc. – and by extension BitTorrent overall – at a time when the company is campaigning hard to dispel the myth that it is responsible for millions of illicit transfers every day.

And believe us, BitTorrent Inc. are working very hard indeed.

Recent discussions between the company and TorrentFreak left us with no illusions that they do not want to be associated with piracy whatsoever and that they want to be judged on their own achievements, not the work of Internet pirates. And who can blame them for wanting to control their own identity and destiny?

Nevertheless, there is a simple fact that cannot be disputed. The words BitTorrent, torrent, torrent site and torrent client are massively and historically associated with online piracy and it is going to take a long-term herculean effort to educate the masses to even the basics, such as those outlined in this article. The anonymous exec thinks BitTorrent Inc. can do more.

“I really missed [BitTorrent Inc] being at the forefront of the piracy issue,” he said. “I don’t remember them going, ‘Naughty, naughty, don’t use our technology for that.’ They don’t give a shit,” he said.

The suggestion here is that BitTorrent Inc. should take responsibility for what countless millions of people are doing with the BitTorrent protocol, something they not only do not own, but the usage of which they lack the ability to control.

It is misconceptions like these that BitTorrent Inc. will have to overcome in their quest to become accepted just like any other technology company. Getting lured into a debate with Hollywood over piracy control is a minefield that no sensible party should seek to get involved in. Ask Google, the demands are never ending.

Finally, it’s perhaps interesting to note that the word ‘BitTorrent’ has all the power here, but in some respects it’s also the poison. Finding the antidote will be a tough challenge but we know that BitTorrent Inc. has no intentions of giving up.