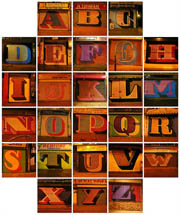 Comedian Dave Gorman is reporting about an unfortunate situation concerning an image he’d posted to Flickr back in 2006.

Gorman reports that in January of that year he’d been out riding his bike when he spotted letters of the alphabet that had been painted on metal shop shutters. He photographed ones he could find, posted them to Flickr, and then people started posting that they knew where the rest were located.

Over the next two days he’d photographed them all and posted them as a single image to his Flickr page. They turned out to be by an artist called Eine and the post by Gorman was a huge hit, netting him a couple of hundred thousand hits to his blog and publicity for the artist.

Flickr allowed him to repost the image but the damage was done – hundreds of fan comments and 6 year’s worth of inbound links to the page had been rendered useless.

Degban CEO Taban Panahi apologized in an email to Dave but said it wasn’t their fault.

“I do apologize for the inconvenience, we have been victim of a phishing/hacking attack, which was aimed at reducing our credibility among clients and the public as you can see how, I truly am sorry that you were effected as such, but allow to humbly suggest that you channel a part of your anger at those holier than thou hackers who effect users like yourself by such irresponsible actions we are working hard to fix the matter, but alas we cannot do much as the size of the attack was larger than we could have expected.

I am hoping you can manage to get back your traffic and are never affected by such issue ever again.”

In comments to AVN yesterday, Degban said that on February 29th their SMTP server had been accessed via a phishing scam and the intruder went on “to report legitimate content as piracy, using our own Take-Down notice templates. ”

Dave Gorman’s opinion is that the explanation “is either bullshit – which is worrying…or true… which is even more worrying.”

TorrentFreak has no way of knowing if Degban was really hacked or not (although Dave’s image was taken down before the company says it was hacked), but ignoring other claims made against the company recently, we thought we’d have a look at Degban’s track record with DMCA takedown requests to see if they take their work seriously.

“I made a few ring-tones and uploaded them so I could distribute them on the fly but [Degban] took them offline out of Google. How can they do this? Is this not illegal? I hope others find this post and do something about them,” writes a disgruntled guy, coincidentally also called Dave.

The content Dave posted can be found here on TorrentTV, but a Google search advises that Degban took the content down via DMCA request in September last year on behalf of Destiny Dixon.

The problem, it seems, is down to Degban using an extremely primitive scanning system. They also fail to check their own results before they make a sworn declaration they are correct.

In a DMCA notice sent to Google against a listing for the torrent site H33t, they took down a link to an album titled Floorfillers 2010 which is owned by Universal Music. A scan of the track listing shows a track by A R Rahman Ft The Pussycat Dolls – Jai Ho! (You Are My Destiny) and another called Breathe Slow by singer Alesha Dixon.

In a DMCA notice to Google against a listing for the torrent site Bitreactor.to, they took down a torrent containing MTV music videos containing content from Destiny‘s Child and Alesha Dixon again. There are several more erroneous takedowns featuring these pair of famous artists, mostly on music compilation albums.

Here are more takedown examples, in brief. (We’ve only linked to the first couple to highlight the errors and for news and research purposes only)

In fact, of 82 DMCA takedown requests issued on behalf of Destiny Dixon in September 2011, at least 25 of them are completely incorrect and relate to other people’s content. Of course, the TV studios and music labels won’t mind the takedowns related to their work, but people like Dave Gorman absolutely do.

TorrentFreak asked Degban for comment, but at the time of publication we were yet to receive a response. It seems fitting that Dave Gorman should be left with the last word….. 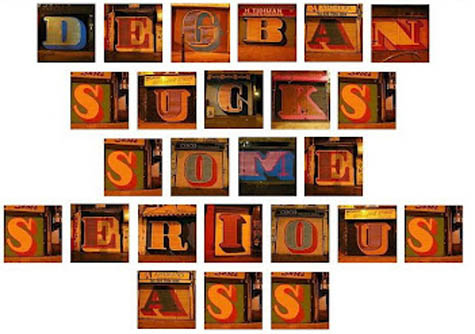