It took an awful long time to arrive but late 2014 the movie and music industries eventually reached agreement with the UK’s leading ISPs to send warnings to subscribers suspected of downloading content from file-sharing networks.

The warning scheme (which is currently notable only by its absence) is part of the Creative Content UK (CCUK) initiative which marries the ‘stick’ of direct-to-door warnings with a broader educational campaign focused on deterrence.

As previously reported the first campaign titled “Get It Right from a Genuine Site” used a colorful cartoon to encourage viewers to boycott ‘pirate’ sites in favor of those which pay licensing fees supporting the entertainment industries.

And now, at the start of a new year, CCUK’s latest initiative can be found on the Intellectual Property Office’s education site, which was launched under the ‘Cracking Ideas‘ brand last November.

Fronted by clay animation stars Wallace and Gromit, ‘Cracking Ideas’ is offering a lesson plan which asks 14-19 year old students to consider “the impact and ethics of film piracy, the consequences of downloading a film illegally and the impact of film piracy on the creative industries.”

Produced by education charity Into Film in partnership with The Industry Trust, The Intellectual Property Office and the Federation Against Copyright Theft, the lesson (titled “Vin Diesel’s Socks”) is built around a student-created anti-piracy PSA of the same name which questions who will fund the action star’s footwear if people pirate rather pay.

When placed side-by-side with ‘classics’ such as “You Wouldn’t Download a Car“, the change of tone is notable.

The lesson is centered around 18 slides with accompanying notes encouraging teachers and other educators to question students on issues including illegal uploading.

“Why do you think people distribute and upload films illegally? What do you think are the consequences of this activity?” one slide asks. Students are given time to think but are then offered these reasons. 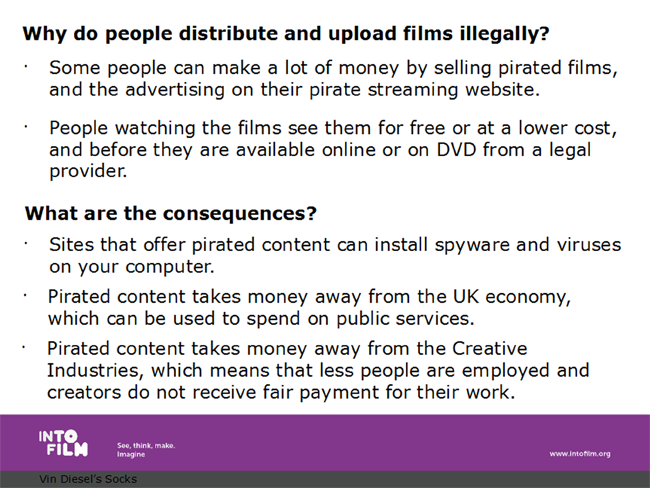 It’s no real surprise that cash is put forward as the prime motivator, even though the country’s most recently jailed pirates made not a single penny from their activities. It is interesting, however, that the slide balances this with the honest statement that pirates often beat legitimate providers to the market, with pricing and availability.

Mirroring similar campaigns underway in the United States, the lesson also reinforces the notion that ‘pirate’ sites are dangerous places. It also falls back on the controversial ‘disappearing money’ argument that money not outlaid on movies is somehow not spent elsewhere in the economy.

But credit where it’s due. A later slide concedes that people who pirate content online are often the same people who pay to visit the cinema, buy DVDs and stream content from legitimate sources. 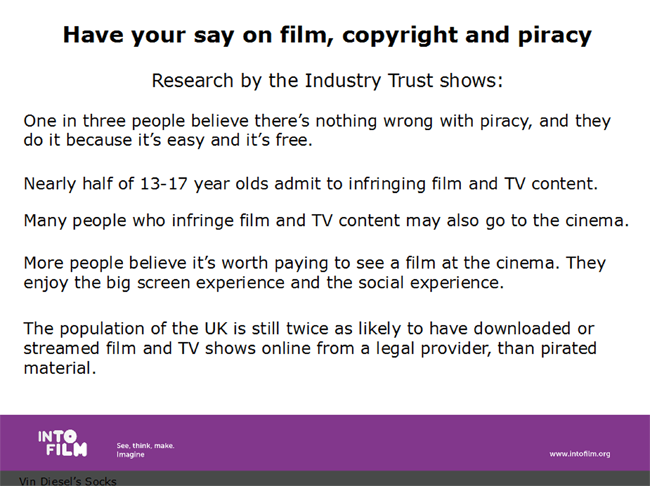 Later, students are asked to consider “Should things that are online be free?” and “Should you do things just because they are technologically possible?”

But what if students believe that piracy generates free buzz, that if they download something and rave about it to their friends, that will boost sales? The lesson’s covering notes provide guidance for teachers on how to respond.

“You may like to explain that creators of films, music or any other product should be in control of how they distribute their product. If they want to share it for free that is their choice, but illegal distribution removes that choice from the creator,” the notes suggest.

And, if students think that plenty of people still go to the cinema and film companies continue to make lots of money, the suggested response is as follows.

“You can suggest that it can take a long time for many films to make a profit and that unless people pay for the film at the cinema, online, on DVD etc, films will not cover their costs or make a profit, this will affect the quality and range of films that are made, and the career opportunities available in the film industry.”

But what if students get really tricky by suggesting that the film industry “is behind the times” by not serving those who want to watch movies as soon as they become available?

“You can suggest to students that some films are available online and on DVD at the same time as they are in the cinema, but that watching a film in the cinema is a different experience to watching it at home and many filmmakers and studios want their films to be an experience, and viewed in the optimum conditions. How a film is released and how much the creators charge for their product is their choice.”

In a later slide students are advised about being monitored online by copyright holders and the subsequent ISP warnings their activity might generate. Notably there is no mention of any punishments or references to breaking the law. The warnings are mentioned solely as a way to direct alleged infringers to legitimate content. This is a big change from past campaigns.

Finally, students are shown slides detailing the work of the Federation Against Copyright Theft but again there is little for them to feel threatened over. Instead, teachers are encouraged to explain that even pirates love movies.

“Explain that many people who access pirated film actually love film and want the industry to continue making great movies. If students love film, they should look for legal providers through Find Any Film next time. Play the Moments Worth Paying For/Star Wars: The Force Awakens trailer and ask students why they think film is worth paying for,” the notes to teachers conclude.

The Vin Diesel’s Socks lesson plan can be downloaded here.

This article has been updated to reflect that the lesson plan was produced by IntoFilm.