There is a good reason why the MPAA and RIAA are not on Facebook. They would become cannon fodder, and every word they post would be carefully dissected by an angry mob.

However, Iceland’s version of the MPAA didn’t get this memo and SMAIS decided to create a Facebook page of their own last week. This didn’t go well for them.

As expected, there were dozens of Facebook users who started attacking the group’s views in the comments. Initially SMAIS responded to the critique, but the response from the public was so overwhelming that the group couldn’t keep up after a while.

What certainly didn’t help was that SMAIS itself never paid for the film and game rating software they purchased from the Dutch company NICAM back in 2007.

“From the moment the contract was signed, everything went silent. There was no contact between SMAIS and us, unfortunately. We tried to contact them, but it didn’t work,” NICAM’s managing director Wim Bekkers said in a recent news report.

This seemingly hypocritical behavior only added fuel to the fire, and there was little SMAIS could do to change the public’s views. The same happened with other comments made by the group, which were all rebutted by the new Facebook “fans,” neither of whom seemed to support the positions of the movie group.

Realizing that they were hurting their image rather than repairing it, SMAIS decided to delete their Facebook page after being active for just four days.

According to SMAIS’ Snæbjörn Steingrímsson the group would have to hire new staff if they want to address all the commentary on Facebook. In addition, Steingrímsson said it was interesting to see that Internet “freedom fighters” believe that only their voice should ne heard on Facebook.

The group left the following message, and is likely to never come back.

Unfortunately it seems that our attempt to be on Facebook is not working out for us at the moment. There are too many people here that only wants to flame us, rather than interact and share their views.

We would still like to thank those who visited our page, and the many that showed interest in sharing their opinions. It is clear that SMÁÍS has a place in the heart of many Internet users, and it’s very surprising how many views and comments this experiment has gotten.

It’s not that we fear criticism or debate, but it’s clear that we have to hire staff that can do this job properly. It is interesting to learn that some freedom fighters think that only some voices have a place on Facebook, but it’s not surprising. This attempt was not in vain, as it shows we have lots to learn before we try again :)

A failed experiment (pic via) 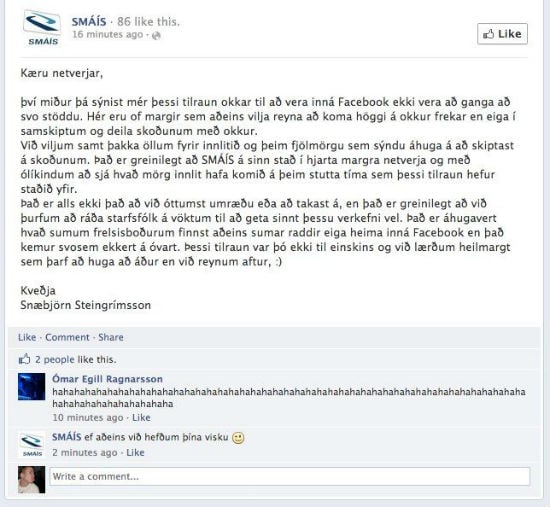