The law, which gives rights holders the authority to request the personal details of alleged copyright infringers, was met with fierce resistance from ISPs and the public at large.

At the same time, however, there were plenty of signs that the law stopped people from pirating. A day after it went into effect, Netnod Internet Exchange reported a significant drop in Swedish Internet traffic.

Inspired by the anecdote, the effectiveness of IPRED has become a topic of interest for economists at Uppsala University in Sweden. In a new paper they report their findings on the effect of the anti-piracy law on Internet traffic and music sales.

The main goal of the research is to examine whether the anti-piracy law did indeed have an effect, and to what extent. To make sure that the effect is unique to Sweden, both Norway and Finland were chosen as control groups.

The results, which will be published in the Journal of Economic Behavior and Organization, confirm that Internet traffic decreased quite a bit after IPRED went into effect, beginning abruptly the very same day. 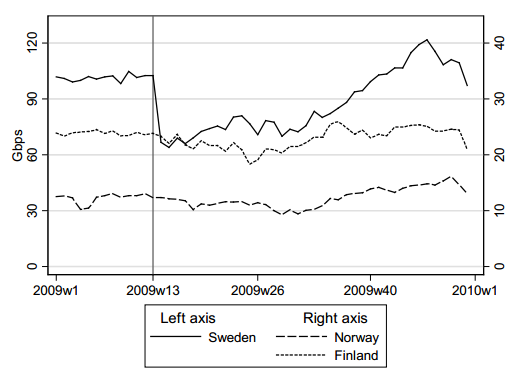 “We find that the reform decreased Internet traffic by 16% and increased music sales by 36% during the first six months. Pirated music therefore seems to be a strong substitute to legal music,” the researchers write, summarizing the results.

“The deterrent effect decreased quickly, possibly because of the few and slow legal processes. Law enforcement through convictions therefore seems to be a necessary ingredient for the long-run success of a copyright protection law,” the researchers note.

The researchers suggest that if more people are convicted, the effects may last longer. During the first few years only a handful of file-sharers were brought to justice, while hundreds of thousands took steps to circumvent the law.

“As the first court cases were only settled recently, it is still possible that further convictions would restore an effect that is more long-lasting,” they write in their conclusion.

The question remains, however, whether bankrupting people or throwing them in jail is the ideal strategy in the long run…