The controversial Intellectual Property Rights Enforcement Directive (IPRED) has gathered opposition from various sides, most notably half of the Swedsih public. In a response to the new law The Pirate Bay introduced their anonymity service IPREDATOR last week, which is scheduled to open up to the public soon.

Now, a day after IPRED came into force, data from the Netnod Internet Exchange shows a significant drop of 30% in Swedish Internet traffic. This impressive figure seems to suggest that the amount of traffic generated by filesharing has dropped even more. 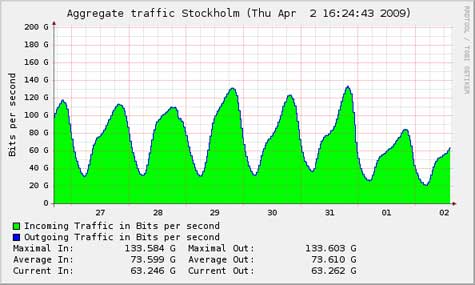 “Most experts (including more neutral ones) judge it as an initial scare effect that will wear off after a week or two,” Swedish Pirate Party Chairman Rick Falkvinge told TorrentFreak, adding “This is what disturbs me the most — that the industry thrives on scaring the common citizen.”

Scaring the public is what they do indeed, with Lars Gustafsson, operating manager of IFPI Sweden estimating that there will be at least 100 cases in court this year.

Henrik Pontén from Antipiratbyrån – the Swedish anti-piracy office – sees the traffic drop as an indication that the new law is working. “The majority of all Internet traffic is file-sharing. Because of that, there’s no other explanation for the decrease in traffic than the IPRED law,” he stated.

The traffic drop is indeed significant, but that doesn’t mean people have stopped sharing. In the past 24 hours 384,657 Swedes were connected to the Pirate Bay tracker alone. That is close to 5% of the Swedish population, and no less than before.

On top of that, many people are looking for ways to hide their identities online. Thousands of new customers have visited new anonymizing service mullvad.net. “It’s beyond all expectations,” said Fredrik Strömberg, one of the two owners. We’ve received e-mails from all kinds of people. Mothers in families, young people, older people, all kinds. And everyone is swearing at the copyright lobby. It’s not good PR for them.”

In a few weeks more details on the filesharing habits of Swedes will surface, so then we’ll know whether or not IPRED changed anything, apart from the annoyance levels of the public.