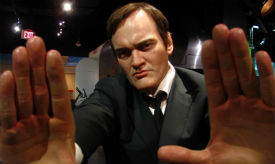 Just when it seemed that Tarantino and his legal team were in for the long haul against Gawker, things have taken a turn for the unusual.

After his initial lawsuit over the leak of his script ‘The Hateful Eight’ was kicked out by a judge due to a lack of evidence, just last week Tarantino filed an amended complaint.

But now, and without even waiting for Gawker to respond to his revised allegations, Tarantino has withdrawn the lawsuit attacking Gawker’s conduct as it reported the leak, or as the writer/director previously claimed, actually encouraged its distribution.

“This dismissal is made without prejudice, whereby Plaintiff may later advance an action and refile a complaint after further investigations to ascertain and plead the identities of additional infringers resulting from Gawker Media’s contributory copyright infringement, by its promotion, aiding and abetting and materially contributing to the dissemination to third-parties of unauthorized copies of Plaintiff’s copyrighted work,” the dismissal motion reads.

The details were covered in our earlier article, but this means that Tarantino may later decide to refile his complaint if he can come up with a way to identify third parties that infringed his copyrights after being encouraged to do so by Gawker. No easy feat.

It’s also possible this is a convenient way to back out of a battle that’s looked less solid after each step. Tarantino loves making films, and it’s doubtful he likes legal battles to the same degree. After spending a considerable sum on lawyers already, swapping one for the other may have been too great a temptation.

‘Tarantino Doesn’t Own the Copyright to Pulp Fiction Screenplay NFTs’