Copyright holders can take a wide variety of measures to tackle online piracy, with some being more creative than others.

Hawaiian attorney Kerry Culpepper has tried different options over the years. This includes using the brands of various pirate sites and services as a weapon.

To pull this off, Culpepper incorporated the Hawaiian corporation 42 Ventures, which he used to register several piracy-related trademarks. The company’s current trademark portfolio includes the popular “YTS,” “Popcorn Time,” and “Terrarium” brands. In addition, it also owns the trademark for the Showbox arrow logo.

Last week, another popular ‘pirate’ trademark was added to this arsenal. 42 Ventures applied for the RARBG trademark which was officially granted on June 15.

The trademark is registered in the software class and described as ‘downloadable computer software for downloading and streaming multimedia content images, videos and audio.’ The same description also applies to the pirate trademarks that were previously registered.

Prior to granting the RARBG trademark, the public had the chance to oppose the registration. However, as far as we know, no one objected. 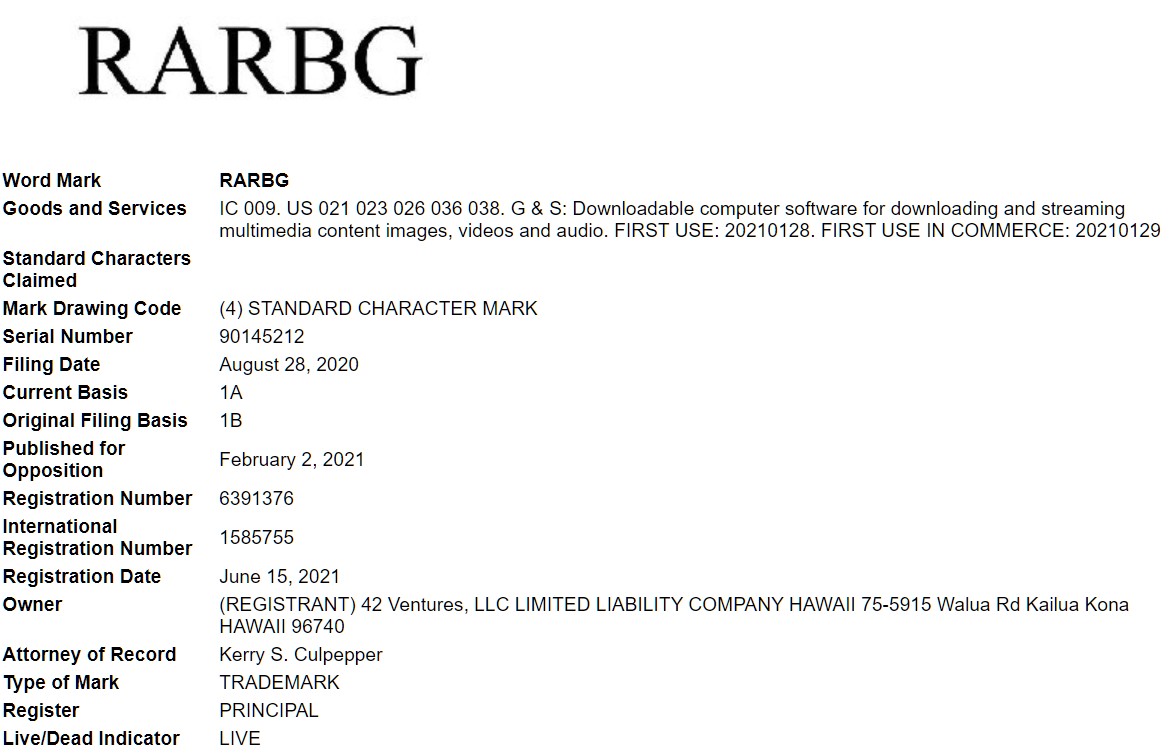 One could argue that this application conflicts with the ‘official’ RARBG site that has been active for over a decade already. This hasn’t escaped Mr. Culpepper, who openly addressed this issue in his initial application.

“There are websites that have been operating under the name RARBG since at least 2008 that promote and distribute torrent files for illegally reproducing and distributing copyright protected content,” Culpepper wrote.

The existing RARBG sites are associated with “blatant piracy,” Culpepper noted, adding that the US Trade Representative listed RARBG as a ‘notorious market.’ Because the official site is believed to be unlawful, it should not be able to claim the trademark.

According to the trademark registration, 42 Ventures first started using the RARBG trademark in commerce in January 2021. This refers to the company’s “moviesstreamsapp” website, where people can download APK files that presumably give access to free movies. At the time of writing the APK link for the RARBG app returns a 404 error. (fixed now)

With the website, Culpepper and 42 Ventures can indeed claim that they use the trademark in commerce. However, they may be more interested in enforcing the trademark against pirate sites, than distributing these apps.

“We plan to enforce the mark to protect our rights,” Culpepper tells TorrentFreak, without going into detail about what action this would involve.

This warning is backed up by the lawyer’s previous actions against people who used the “Popcorn Time,” “YTS,” and “Showbox” trademarks.

Last year he filed a lawsuit against websites that used the “YTS” brand, accusing the operators of trademark infringement. Around the same time, a trademark claim was used in an effort to identify the owners of several Showbox sites.

42 Ventures has also used trademark complaints to suspend the Twitter account of a popular Popcorn Time fork. Interestingly, the company offered to lift the claim in return for a settlement payment.