Apple: Sorry, Those BitTorrent Apps Were Approved by Mistake 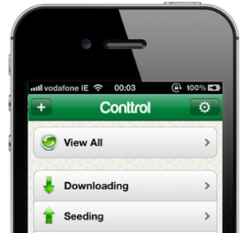 Just a few days ago we published an article suggesting that Apple had lifted the ban on BitTorrent apps.

This spring the company gave its blessing to a remote control app for the Transmission BitTorrent client, and this surprise approval was followed by another for a similar uTorrent app last week.

This was a fairly remarkable move since Apple previously told developers that their apps were not allowed because “this category of applications is often used for the purpose of infringing third-party rights.”

However, as it turns out the excitement was only temporary.

Craig Donnelly, developer of the Conttrol app for uTorrent, informs TorrentFreak that he received a phone call from Apple’s headquarters yesterday.

“Got a call there a little earlier from California,” Craig says. “It seems Apple are not ok with apps that have anything to do with BitTorrent.”

“The nice girl on the other end of phone said that Conttrol had been approved by mistake and Apple were sorry for the inconvenience but apps of this nature are not allowed in the store,” he adds.

So that’s it. BitTorrent apps are still banned by Apple, indefinitely.

While we haven’t heard from the Transmission RPC developer, we assume that he got a similar call.

Apple’s mistake is not just a blow to the developers who worked for weeks on their apps, but also to the users who spent hard cash to buy them. Some Transmission RPC users bought the app months ago and will soon have it wiped from their iOS devices.

Craig has now decided to sell his app at a discount for as long as it lasts, but that’s still a risky investment with the pending ban. Apple told him that his app will be pulled within a few days.

For those who don’t know yet, Google’s Android Play store is more reasonable when it comes to accepting file-sharing apps. And according to Apple some Android phones are indistinguishable from the iPhone, so…

Update: Both apps have been pulled by Apple now.