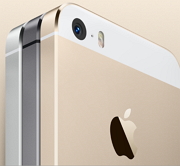 Unprecedented pre-launch hype and massive day one queues are things that Apple thrive on and are achieved at pretty much every major product launch.

With a huge and fanatical customer base the launch of a new iPhone always ticks every box and the launch of the 5s model in September was no different. With people reportedly selling their places in the lines outside US and UK stores for hundreds of dollars and pounds, the atmosphere was as frenzied as Apple had hoped for.

Inevitably stocks were diminished as Apple failed to keep up with supply, of iPhone 5s in particular.

“One week later and there’s still a line about the length of a football field outside the GSP Apple Store,” came the word on Twitter September 28.

“They’re idiots,” came the response. “We have had tons of them in inventory at VZW [Verizon Wireless]”

Realizing that stock may well be available if people looked in the right place, a solution to the problem was created by developer Mordy Tikotzky. His web-based iPhone-Check tool scanned Apple’s retail store site and allowed users to enter their ZIP code, specify a color and a carrier, and then be presented with a list of available phones at Apple stores in the area.

The site was a real hit with both potential Apple customers and the press, and was covered in articles on CNET, Gizmodo [image credit], LA Times, Time, CNN, Forbes and Huffington Post to name just a few. Just days ago Tikotzky added iPad Air support but sadly the fun is now over. 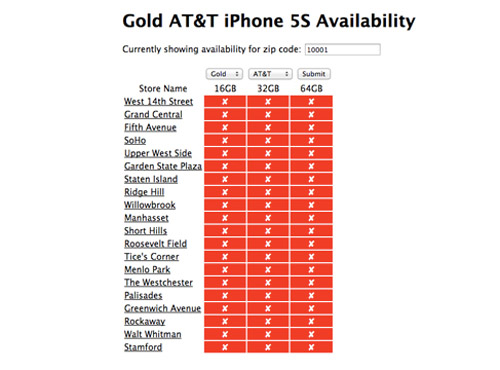 “I’ve decided to turn off the site. I’m not doing this because I want to, but rather because I received a DMCA takedown notice…from Apple,” Tikotzky just announced.

The notice, sent by the Kilpatrick Townsend and Stockton law firm, invites responses to an email address that begins APPLE_COPYRIGHT.

“I have a good faith belief that the website identified by URL below is unlawful because, among other things, the page scrapes and collects data from apple.com in violation of the apple.com Internet Service Terms of Use,” the notice reads.

“You may not use any ‘deep-link’, ‘page-scrape’, ‘robot’, ‘spider’ or other automatic device, program, algorithm or methodology, or any similar or equivalent manual process, to access, acquire, copy or monitor any portion of the Site or any Content, or in any way reproduce or circumvent the navigational structure or presentation of the Site or any Content, to obtain or attempt to obtain any materials, documents or information through any means not purposely made available through the Site. Apple reserves the right to bar any such activity.”

Although Tikotzky frames the cease and desist as a DMCA notice, the DMCA isn’t specifically cited. Copyright is mentioned several times though, including that the information scraped/obtained from Apple’s site had important copyright-related information removed.

“I have a good faith belief that the removal of copyright management information from the material listed above is not authorized by law,” the notice adds.

Copyright Management Information (CMI) includes things such as the title of the work, its copyright notice, plus items that identify the author and terms and conditions for use of the work. Under the DMCA it is unlawful to remove CMI from a work, but whether stock information amounts to a ‘work’ is arguable.

Tikotzky admits that he scraped Apple’s website to get the information for his tool, but whether that constitutes an infringement or a simple terms of use violation is clearly something he doesn’t have the patience to find out.

“I’m not really interested in picking a fight with Apple so….. I guess it time to just say good bye,” Tikotzky concludes.

While it seems likely that the site could have generated sales for Apple, a commenter on Gizmodo who claims to be a former company employee explained that they company likes to do it their way.

“Apple wants people to come into the store and ask and seek out. Their entire goal is to get you to repeatedly come to the store. Why? Because if you’re in the store you’re more likely to buy something. If you’re in a line outside the store, you’re creating free advertising for Apple,” he said.

“In either case, Apple is -very- strict about controlling the flow of information about itself, wherever possible. I used to work for Apple, I know full well that they don’t like this sort of thing.”