Piracy is Disgusting! No, it’s Promotion! Artists Disagree as Links Get Removed 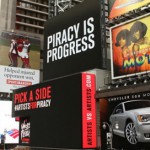 The issue of Internet piracy is certainly a polarizing one, with different camps setting out their stances over whether the practice is generally a good or bad thing.

Just last month a report from the London School of Economics reignited the debate after coming to the conclusion that rather than hurting the entertainment industries, piracy is actually helping matters.

Needless to say, the MPAA and IFPI were less than impressed with that conclusion and quickly moved to counter the study. But while scholars and music businessmen fight it out, what about the opinions of those who are supposed to really matter – the artists.

The BBC has spoken to several British artists to get their views on piracy and their responses are quite a mixed bag.

Pop icon Jessie J didn’t deviate from the opinions she’s expressed in the past. Perhaps cleverly addressing the “nothing was stolen” response to the piracy-is-theft mantra, the 10 million album selling star said downloading is akin to taking someone’s time.

“It’s like going to the hairdressers, having your hair cut and running out,” she said.

“You can’t make music for free, you can’t live for free. If people illegally download your album it’s very likely that you won’t make another one.” 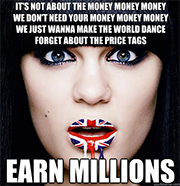 Of course, plenty of people downloaded Jessie J’s first album and she’s just released another, so her argument doesn’t quite stand up. However, she was nowhere near as aggressive as singer John Newman.

“I think it’s disgusting. Get some respect for the artist. It’s not fair at all,” he said. “[Downloaders are] ruining the music industry, they really are and it’s really not fair.”

“Before there was the internet, there was people selling mix tapes and CDs with your music on it – they sell it, they benefit from it,” he said. “I get promotion out of it, which is a good thing for me, because people like my song and put on a stage show.”

Producer Naughty Boy, who has deals with Sony and Virgin EMI, says that there’s plenty of money to be made, even in the face of piracy.

“I don’t like the idea of people thinking you’re never going to get rich from music. You can, even with illegal downloading,” he told the BBC. “You’ve just got to make great music that people want to buy. You’ve just got to give them more of a reason to buy it than before.”

Of course, while the artists have their differing opinions, the major labels are singing with one harmonious voice – piracy is bad and it costs them money. Together they finance the BPI whose anti-piracy department takes down millions of links from file-sharing sites and search engines such as Google. Whether Sean Paul likes it or not, links to his music get taken down too. 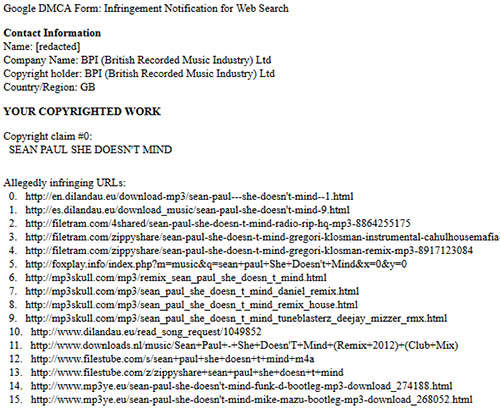 The BBC were invited to the secretive operation where they spoke with John Hodge, the BPI’s head of internet investigation who suggested that people at home – the actual downloaders – aren’t a BPI target.

“Our focus is on the people who want to make profit,” Hodge said. “Whether it’s streaming or downloading, there’s somebody there facilitating this and making money out of it.”

Like the FACT operatives who visited the home of a file-sharing site admin earlier this month, the remainder of the BPI’s five man anti-piracy team asked to remain anonymous. Taking down links must be a dangerous game these days.