Artists Protest RIAA for Trampling on Their Moral Rights 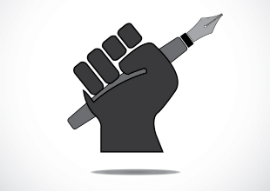 Most people who create something like to be credited for their work. Whether you make a video, song, photo, or blog post, it feels ‘right’ to receive recognition.

The right to be credited is part of the so-called “moral rights,” which are baked into many copyright laws around the world, adopted at the international level through the Berne Convention.

However, in the United States, this is not the case. The US didn’t sign the Berne Convention right away and opted out from the “moral rights” provision when it eventually joined.

Now that the U.S. Copyright Office is looking into ways to improve current copyright law, the issue has been brought to the forefront again. The Government recently completed a consultation to hear the thoughts of various stakeholders, which resulted in several noteworthy contributions.

As it turns out, the RIAA doesn’t want artists, such as songwriters, to have moral rights. Crediting everyone who’s involved in making a song can be confusing and complicated the group notes, arguing against the addition of a new statutory attribution right.

The RIAA highlights that it would be costly for streaming services to credit everyone involved in the creative process. In addition, they stress that the likes of Spotify might not have the screen real estate to attribute all creators, without ruining the user experience with long lists of names.

“If a statutory attribution right suddenly required these services to provide attribution to others involved in the creative process, that would presumably require costly changes to their user interfaces and push them up against the size limitations of their display screens,” the RIAA writes.

These comments don’t sit well with songwriters and other creators around the world, who feel that the RIAA is putting trivial metadata issues above their rights. In a protest against the RIAA’s stance, several songwriter groups around the world are now joining hands to show their discontent.

“The RIAA’s argument prioritizes the inconvenience of dealing with accurate metadata over the principle of the protection of the rights of the people upon whose work the music business is built,” the letter reads.

“More fundamentally, RIAA’s comments are taken by many in the music creator community as a betrayal of our joint commitment to expand opportunities for creators. Unfortunately, this divergence of views gives our common adversaries an opportunity to divide our community.”

The groups warn that without proper attribution, songwriters and other contributors risk not receiving any compensation for the work they do. This puts the RIAA in the same camp as those who want to weaken copyright in general, the letter notes.

“Without accurate metadata, contributors to a work risk not getting paid. That’s a moral dilemma intrinsically linked to the issue of moral rights — and on this issue the RIAA has now aligned itself with those who seek to enfeeble IP rights.”

The RIAA’s stance goes even further than that of Creative Commons and the “copyleft,” according to the groups.

“Even anti-copyright groups like Creative Commons understand the importance of attribution. If the RIAA is seen as less artist-friendly than Creative Commons, the copyleft and all who seek to undervalue our work will benefit.”

While Creative Commons has more flexible views on copyright than the average entertainment industry company, describing it as “anti-copyright” goes a bit far. Still, the groups send a strong message to the RIAA, that the organization’s stance on moral rights is abhorrent.

The songwriter and artist groups stress that the RIAA might shoot itself in the foot, as it’s distancing the people it needs to further its interests around the globe. As for the metadata problems, they believe that the streaming platforms and other services will come up with a proper solution eventually.

“We believe there’s no doubt music platforms will come up with innovative and effective ways to give credit. Certainly there’s no need to set expectations at rock bottom as the RIAA did in their comments,” the groups write in their letter.

The groups urge the RIAA to revise its views and start collaborating with creators to address specific implementation problems. The record labels and creators should stand together as one, instead of going against each other.

It will be interesting to see if and how the RIAA responds to the critique.

While the US Government has yet to decide on the moral rights issue, in other countries the attribution right is taken very seriously. Just recently, a District Court in Isreal awarded a local music composer $223,000 in statutory damages because his name was removed from the credits of an online kids animation series.