Despite the growing availability of legal services, unauthorized file-sharing continues to generate thousands of petabytes of traffic each month.

This massive network use and its legal implications have received plenty of interest from Internet providers over the years, and AT&T now believes it has found a good way to deal with the ongoing threat.

A new patent awarded to the Intellectual Property division of the Texas-based company describes a system that can classify unauthorized file-sharers on its network, place them in a “risk category”, and take appropriate action to counter their defiant behavior.

Titled “Methods, devices and computer program products for regulating network activity using a subscriber scoring system,” one of the patent’s main goals is to target and stop online piracy.

“Internet piracy may account for significant bandwidth usage, which may be problematic for a service provider,” the company explains. “Thus far, copyright protection measures that have been deployed by, for example, the entertainment industry, have failed to curtail increases in Internet piracy.”

“For example, millions of downloads may result from just one file that is posted on a shared network. Thus, efforts to date have been insufficient in protecting a user and/or a service provider from the results of unwanted network activity, which may pose significant risks to the user, network and/or service provider.”

By analyzing network usage patterns the provider can give customers a Subscriber Reputation Score (SRS) based on which they can be classified into several risk categories. Depending on the type of threat AT&T can then take appropriate countermeasures. 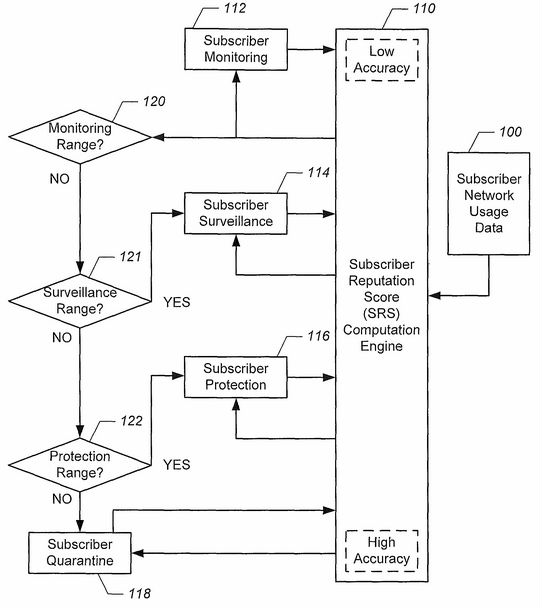 The system can be used for a variety of problematic network activities, but online file-sharing is used as one of the main examples in the patent.

When subscribers are placed in the high risk file-sharing category the ISP may choose to limit their network access, which includes blocking access to known pirate sites.

Whether the provider has intentions to test or implement the scoring system in the real world is unknown. One thing is clear though, AT&T has an above average interest in online piracy, which is reflected in the company’s patent portfolio.

Earlier this year the ISP also patented systems to track content being shared via BitTorrent and other P2P networks, and report offenders to the authorities.