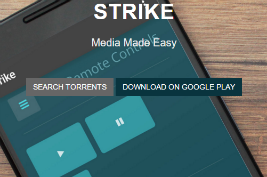 This week Aurous developer Andrew Sampson settled his legal dispute with the RIAA. He now owes them $3 million.

While the outcome is a financial disaster for the student he doesn’t plan to crawl into a corner, quite the opposite in fact. His torrent search engine Strike was brought back online recently, serving torrents to the masses.

Update: Shortly after we published this article Sampson changed his mind and decided that it is probably best to take the site down after all. At least for the time being. This means that the rest of this article contains statements that no longer apply.

The Strike search engine launched earlier this year and provides users with a tool to find the latest torrents. The site itself doesn’t host any files but pulls data directly from BitTorrent’s DHT. The site’s users can then click on magnet links to download the associated files.

When Sampson was sued by the RIAA in October the Strike search engine was also taken offline. Many assumed that this was a legal precaution and that Strike was one of the infringing activities mentioned in the Aurous complaint.

According to the RIAA the search engine was “specifically designed to promote copyright infringement on the BitTorrent network, which is notorious as a source for pirated music, movies, games, and software.”

While he has indeed signed a settlement agreement that prohibits him from operating any services that infringe on the copyrights of the major music labels, Strike is now back online.

According to the Florida-based developer the search engine operated within the boundaries of the law. People who visit the site won’t see any infringing content unless they specifically search for it.

“Strike’s search engine is powered by a blind spider, it can only see hashes, seeders and leechers. This is all the data it collects, from there when a user requests a hash using either our API or the main search interface, information on that hash is fetched and delivered,” Sampson tells TF.

“Strike doesn’t offer any actual torrent downloads nor does it direct you to a place to download it. We do offer magnets, but this is just for ease of use,” he adds.

Indeed, the search engine doesn’t link to external torrent sites. However, the magnet links have a similar function to torrents and provide enough information to download the files which are referenced in search results.

Still, Sampson maintains that Strike doesn’t encourage any infringement and that it’s mostly a meta data engine. He will continue the project and says that it’s his ultimate goal to create a set of tools that can power a Home theater PC.

The Strike API helps with that, with tools such as the remote task manager and the remote control functionality.

Technology aside, in copyright infringement cases the legality of a service often boils down to how it’s presented. A neutral torrent client can become blatantly infringing when it’s advertised as the ultimate pirate tool.

The RIAA previously pointed out how Sampson “boasted” about the infringing search results pirates could find with Strike, which is something that’s best to avoid to keep out of trouble.

What’s perhaps most striking about the whole situation is that the RIAA didn’t make Strike an integral part of the out-of-court settlement. This appears to be an oversight, or perhaps they are not bothered too much about the search engine.

TorrentFreak asked the RIAA about their current position on the Strike search engine, but the group did not wish to comment.