When long-time software pirate Jakub F was tracked down by the Business Software Alliance, things were looking bleak.

After years of illegally sharing titles including Microsoft’s Windows, the Czech national faced a police raid at his workplace and the confiscation of a computer and related equipment. And that was only the beginning.

As previously reported, Jakub ended up with a three-year suspended sentence and the possibility of getting sued for more money than he could pay in a lifetime.

However, with little chance of collecting such a huge amount, the BSA made Jakub an offer he couldn’t refuse. Make an anti-piracy ad, reach 200,000 YouTube views, and get away with a financial slap on the wrist.

The deal was done and after a slow start the video suddenly went viral. At the time of writing and against the odds, it now has in excess of one million views. 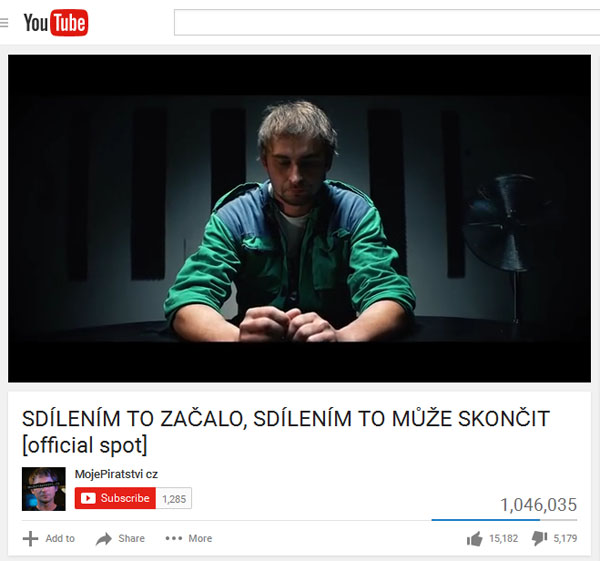 While Jakub might look sombre in the image above, the (presumably) former pirate must be delighted at achieving his target. Two hundred thousand views was a pretty big ask and he must’ve wondered whether it would be possible. But once news began to spread, people seemed more than happy to help.

At the time though, many (myself included) dismissed Jakub’s video as propaganda. It was, after all, a pirate being paraded in public, humiliated even, for the pleasure of corporate giants. But the more one thinks about it, hasn’t this turned out well for everyone?

After keeping up his side of the bargain, the BSA is finally off Jakub’s back and he can relax, free from the worries of financial ruination. Suspended sentence aside, that’s the best result he could’ve hoped for.

The BSA got what they wanted too. Getting a million views and a viral story for an anti-piracy ad is a really spectacular achievement that nothing has come close to matching in recent years. The UK’s Creative Content campaign, for example, has a lot of backing yet its video has only clocked up 123,000 views since October.

But there are other winners too. The campaign, whatever people thought of it, became a huge talking point for a few days, sparking interest in the whole copyright debate. Did Jakub get what he deserved? Did the BSA go too far? Where can I download Jakub’s stuff? Yes, there was some of that too.

Overwhelmingly though, people seem to come out in support of Jakub, the little guy getting picked on by bullies. While each YouTube click might indeed represent a win for the BSA, each view could also be viewed as an Internet upvote for a desperate man down on his luck. And with Adblock turned on, as some vowed, the BSA wouldn’t get a penny.

Nevertheless, to appreciate the true value of the video one needs to view it through forgiving eyes. While some may disagree, I believe that while a dramatized version of events, the video was a pretty realistic depiction of what can happen to some Internet pirates. They do get tracked, they do get raided, they do face prosecution, fines, damages and God knows what else.

In that respect the BSA video is not only cautionary, but educational. It’s intended as a scare piece, no doubt about that, but for many it will function as a useful and helpful reminder that any prolific sharer is in danger of being singled out online if precautions aren’t being taken. Clearly, some people need reminding.

In this instance everyone gained something from the experience and Jakub got off extremely lightly indeed. If you still have doubts, tune in tomorrow for a really shocking story about several young men teetering on the brink of having their lives changed forever. This BSA deal will look like a walk in the park in comparison and no will come out a winner.