Aussie ‘Doctor Who’ Fans Set to Time Travel With BitTorrent 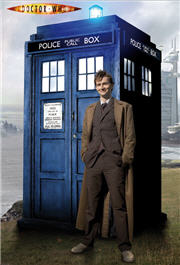 The number of people downloading TV shows via BitTorrent is growing. Our ‘Top 10 Most Pirated TV-Shows of 2008’ list reveals that some shows are amassing downloads in their millions and this will only increase.

Whereas some people may download a movie to avoid the cost, TV shows offer something different. People are generally able to watch these shows for free on regular TV, but still, due to superior convenience and greater availability, those same people choose to get their fix from BitTorrent instead.

In Australia right now, online piracy is a hot topic, with anti-piracy outfits going as far as trying to hold ISPs accountable for the infringing actions of their customers, and the ‘firewall’ of Australia threatening to target BitTorrent. But when it comes to deterring piracy it seems the big studios are blind to some of the small things they can do to make the situation better, instead of continually going to war with pirates – a war they simply cannot win.

The TV show Doctor Who, like many shows, has a ‘Christmas Special’. This episode, unsurprisingly, will air Christmas Day on the BBC in the UK. In it the Doctor will have one of his trademark re-incarnations, a very important event for fans of the series. The problem for Australian viewers is simple – ABC who have the rights to the show think that Christmas Day falls on January 25th 2009 down-under, as this is the date it will air there, officially at least.

But of course, Doctor Who fans know about BitTorrent, the show has appeared in our most pirated TV show lists and was even subject to a major ‘leak‘ of its own.

Thanks to ABC’s short-sightedness, thousands of Australians will pirate this episode of their favorite show just minutes after it finishes airing in the UK and a month ahead of its official launch. It’s not just The Doctor who is capable of time-traveling these days.