The best description of Files24 is a mashup between IMDb and BitTorrent. All the movies listed on the site have a plot description and list of cast members, the film’s director, year it was produced and the genre it falls under. In addition the site lists the IMDb rating of each film with a direct link to IMDb.

What’s most interesting about the site is that its users can also browse torrents based on an actor or director, a feature that other torrent sites lack. With just a single click users can list all the films where Patrick Swayze made an appearance, or all the films directed by Quentin Tarantino.

“The actors and directors can be added by the users when they upload a torrent file,” Files24 founder Oleg told TorrentFreak. “Also if we recognize the movie, we automatically check and fill in any missing data,” he added.

Although the site also lists music and games, thus far these advanced searches only work for movies. TV-shows are oddly enough listed in the movies section but Oleg told TorrentFreak that a TV and software section will be added in the near future. 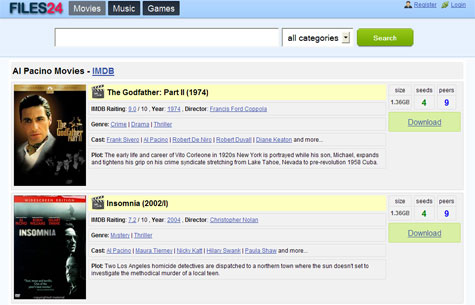 The navigational structure and design of the site is not the only thing that’s unique to Files24 though. According to one of the site’s founders, Files24 also has a dedicated tracker that is optimized to facilitate the highest download speeds.

“We track which country users come from and the tracker then gives priority to peers from their own country. As a result users can download at much higher speeds,” Files24’s Oleg told TorrentFreak.

One of the downsides of the site is that users are only permitted to upload torrents with a Files24 tracker, so this may severely limit the number of torrents that will be added to the site. On the other hand this is also one of the upsides, since this will stop a great deal of spam and fake files from being uploaded.

Files24 went live yesterday and currently lists some 40,000 torrents. It is clear that the site is still work in progress but the new features the site has to offer will be welcomed by many BitTorrent users. Of course they will also be frowned upon by Hollywood. Nothing new there.