BitTorrent Inc. is mostly known for the development of the uTorrent and BitTorrent Mainline clients, but today the company adds another piece of software to its arsenal.

Dubbed “Share,” the new application is targeted at people who want to share large files with a private group of people, as opposed to uploading them via a public BitTorrent site for all the world to see. With the tagline “No more storage limits. No more fees” it also takes a stab at the increasingly popular cyberlockers.

Although the software uses BitTorrent under the hood, people are not required to create torrent files. Instead, they can select files on their computer, pick a person or group to share them with, and the application takes care of the rest.

According to BitTorrent’s chief strategist Shahi Ghanem the new application fits perfectly into a world where media files grow larger and larger by the day.

“With today’s consumer cameras/video recorders producing stunning quality, traditional media sharing requires concessions. With Share, you don’t have to crop photos, reduce resolutions or cut video length to easily share something with your friends, family and colleagues. It’s much faster than traditional ‘cloud’ solutions and easy for anyone,” says Ghanem. 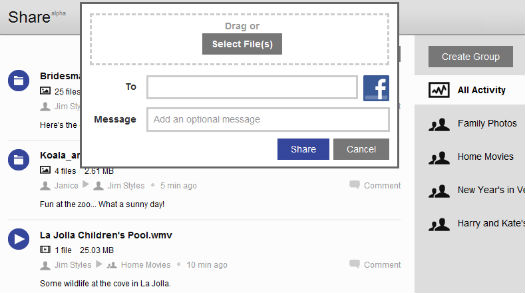 Those with a keen eye for detail may see similarities between “Share” and the “Project Chrysalis” client that was released last year. The new application is an improvement over the Chrysalis client, directly based on input from users.

“After evaluating the user response and feedback, we realized we had the right goal, but users identified challenges with the implementation. Ultimately, we took what we learned and started again from scratch. Share was born,” Ghanem explains.

The Share project is currently in an early Alpha phase, but once it has matured the application will be integrated into the existing uTorrent and BitTorrent Mainline clients. Although some might find this useful, there is also a group of uTorrent users who would prefer to keep a lighter client.

In recent years uTorrent has been augmented with quite a few extra bells and whistles, features that some traditional BitTorrent users are not interested in. To address these concerns, we asked whether BitTorrent Inc. would consider releasing a more basic version of the popular client as well.

“We might consider it in the future – it’s definitely not out of the realm of possibility,” we were told. “Right now, even with the new features, the client is still very small and efficient on resources. We also review features very frequently, and if they aren’t being used, we are always open to removing them.”

A uTorrent “light” may indeed not be a bad idea to please the angry mob. Those who are less resistant to change are of course invited to give Share a spin.