BitTorrent Set To Rebrand Itself As Gyre? 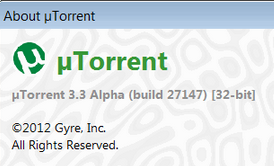 A few days ago the latest uTorrent alpha release saw the light.

Among other things, the new version aims to make downloads even faster for users with high bandwidth connections.

But there was something else quite unique about the release. Those who took a peek at the ‘about’ section saw the name of a new mysterious company. BitTorrent Inc. wasn’t listed there, but Gyre Inc.

So had uTorrent been quietly sold?

TorrentFreak contacted BitTorrent Inc. to find out more, and we were told that Gyre Inc. was listed there because of a “coding error.” The company didn’t want to confirm or deny the existence of a rebranding exercise, but did say that they “regularly test new brand and product names internally.”

This vagueness encouraged us to research the “Gyre” brand and to speculate about BitTorrent’s future.

Let’s start with some details on Gyre Inc. first. The company was registered in January of this year and lists BitTorrent Inc. CEO Eric Klinker as the service agent. The company address is identical to that of BitTorrent’s San Francisco offices.

And that’s not all.

There is also some evidence to suggest that Gyre is more than just a front for a new product. The company name already appears in the “Terms of Use” for the “Share” app released by BitTorrent Inc. a few months ago. In these same terms there’s also a reference to “SoShare”, another term trademarked by BitTorrent recently.

BitTorrent developers are also referencing Gyre in their code. In the new plugin.btapp.js for example we see several mentions. This is part of a yet-to-be-released product where web browsers can talk to uTorrent/BitTorrent via a plugin.

And what about the unusual fact that “Gyrecorp” is selling uTorrent stickers and shirts? 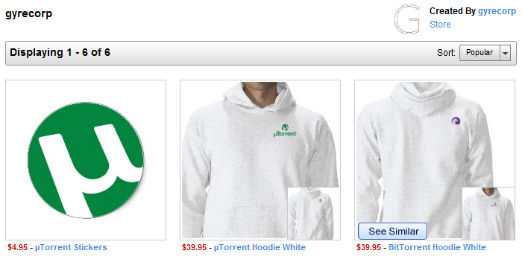 But perhaps the strongest support for a possible rebranding is that BitTorrent didn’t deny this when we specifically asked about it. We were informed that uTorrent and BitTorrent will continue to be released under BitTorrent Inc. But it wasn’t specified for how long.

BitTorrent Inc. wouldn’t be the first of its kind to change names. Several years ago Azureus changed its name to Vuze. This rebranding also covered the name of the BitTorrent client, but there is no indication that the uTorrent brand will disappear.

The ultimate question is of course why BitTorrent Inc. needs a new brand name to begin with. Could it be the pirate stigma? Are investors pushing for something new? Is there a sale on the horizon?

All speculation for now, but something is up for sure.