Over the years we have been following various reports on Internet traffic changes, specifically in relation to BitTorrent.

One of the emerging trends is BitTorrent and P2P traffic as a whole losing its share of total Internet traffic, in North America at least. A new report published by Sandvine this morning confirms the downward spiral but also suggests that there is actually less BitTorrent traffic.

Previously BitTorrent only lost some of its share of overall Internet traffic, but now the actual bandwidth consumed by the protocol also appears to be in decline.

Compared to six months ago BitTorrent’s share of all Internet traffic during peak hours in North America dropped by 20% to 7.39%. At the same the average bandwidth consumed by Internet subscribers remained relatively stable at 44.5 gigabyte per month, suggesting that BitTorrent traffic has gone down overall.

This would be the first time in history that the bandwidth consumed by BitTorrent transfers has declined. However, the results should be interpreted with caution as the lack of growth in bandwidth consumption is suspicious, especially when compared to previous years.

Impressively, Netflix and YouTube together are good for half of all downstream traffic during peak hours in North America. 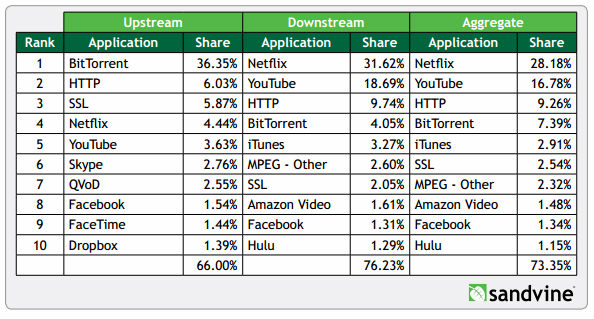 During peak hours nearly half of all upstream traffic (48%) in Europe can now be attributed to BitTorrent. In Asia-Pacific and Latin America, BitTorrent traffic is still on the rise according to Sandvine’s data, with 21% and 11% of total Internet traffic during peak hours.

Assuming that BitTorrent traffic did indeed decline in North America, there are several factors that may explain this finding. It could be that the start of the U.S. Copyright Alert System in February caused people to stop downloading, or download less.

In addition, the increased availability of legal download and streaming options may have steered people away from sharing copyrighted material via BitTorrent.

Time will tell whether the downward trend in North America will continue in the months to come, and how the global differences in BitTorrent usage will develop.