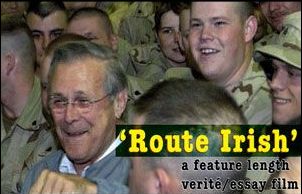 One such example is the recent release of ‘Route Irish‘, a film mainly about the protests at Shannon Airport in Ireland, over its assistance to the United States, in the latter’s actions against Afghanistan, and Iraq. Produced through Indymedia Ireland, it is a 90 minute documentary compiling footage donated over the last few years to its editor, Eamonn Crudden. “10 peoples footage,” he replied when asked about the video’s source, “copyleft is what they had in common and it made this film possible really.”

Crudden claims that the film would not gain coverage in Ireland, due to certain clips contained in the film, pointing out the American taking pictures around 16 minutes into the film, to TorrentFreak as an example. Usually, such low-budget independent releases would have been put on videotape, copied a few dozen times, and passed around those already interested in the topic, a videographic samizdat as it were. With the advent of BitTorrent, the reach of the film-maker has exploded.

When asked why he decided to to release via BitTorrent, Crudden, who described himself as ‘pretty untechnical’, said “Basic answer is I saw Steal this Film and read I stuff kind of in an academic way by Eben Moglen and an Irish guy called Alan Toner and they just argued that this was the maximum efficient system in history for distributing stuff. I also thought it might get out of an activist ghetto that way too.” And get out of the ghetto it has. Whereas, he explained, it used to take “months and months to get rid of 100 VHS tapes of a documentary back in the day,” according to the tracker stats, since its release it was downloaded more than 1000 times.

One of the comments to the first part asked “can we get the cost to make a film low enough to enable a blue-collar moviemaker scene?” Eamonn thinks so, and is working on that, as a part time tutor in film production in Queens University, Belfast. He also has a word of warning for the major Hollywood studios. “[It] makes entry level at a global level easy for people without gatekeepers and cliques determining what gets made. It will get very interesting when a generation really familiar with it start bypassing institutional production AS WELL AS distribution”

The production and dissemination of work which may otherwise be censored is a significant non infringing use of P2P that no court should be quick to dismiss. No court that values free speech anyway.

The torrent for Route Irish is available here.