Being monitored online is a reality largely acknowledged by millions of file-sharers worldwide. Countless rightsholders, anti-piracy outfits, analytics companies and other interested parties crawl BitTorrent and other P2P networks every day, spying on downloads and gathering data.

While the public nature of these networks is perfect for those looking to eavesdrop, individuals who use file-hosting sites are often under the impression that their transfers cannot be monitored by third parties since transactions take place privately from user to site via HTTP.

That assumption has today been blown completely out of the water amid revelations that Canada’s top electronic surveillance agency has been spying on millions of downloads from more than 100 file-sharing sites.

Led by the Communications Security Establishment (CSE), Canada’s equivalent of the NSA, and codenamed LEVITATION, the project unveils widespread Internet surveillance carried out by Canadian authorities.

A document obtained by U.S. whistleblower Edward Snowden and released to CBC News shows that in an effort to track down extremists the spy agency monitors up to 15 million downloads carried out by users around the world every day. 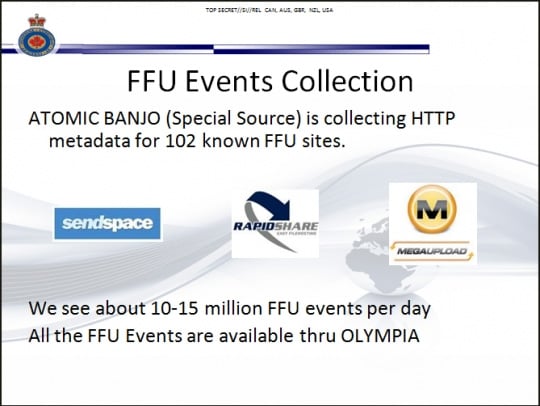 According to the 2012 document, 102 file-sharing platforms were monitored by CSE. Just three were named – RapidShare, SendSpace, and the now defunct Megaupload. None of the sites were required to cooperate with the Canadian government since CSE had its own special capabilities.

“A separate secret CSE operation codenamed ATOMIC BANJO obtains the data directly from internet cables that it has tapped into, and the agency then sifts out the unique IP address of each computer that downloaded files from the targeted websites,” The Intercept‘s analysis of the document notes.

Once harvested those IP addresses are cross-referenced with vast amounts of additional data already intercepted by the United States’ NSA and its British counterpart GCHQ. Subsequent searches have the ability to show a list of other websites visited by those downloading from file-hosting sites.

Further associations can then be made with Facebook or Google accounts (via Google analytics cookies) which have the potential to link to names, addresses and other personal details. It’s a potent mix but one apparently designed to weed out just a small number of files from millions of daily events. 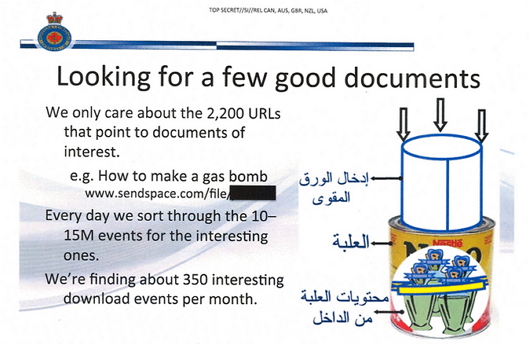 According to the LEVITATION documents the system has the ability to track downloads in countries across Europe, the Middle East, North Africa and North America.

Under law, CSE isn’t allowed to spy on Canadians, but IP addresses belonging to a web server in Montreal appeared in a list of “suspicious” downloads. Also monitored by CSE were downloads carried out by citizens located in closely allied countries including the U.S., UK, Germany and Spain.

“CSE is clearly mandated to collect foreign signals intelligence to protect Canada and Canadians from a variety of threats to our national security, including terrorism,” CSE spokesman Andrew McLaughlin told CBC.

While it may be of comfort for Canadians to learn that the government is only interested in a small number of files being exchanged outside the country’s borders, mass surveillance of this kind always has the potential to unnerve when mission-creep raises its head.