When it comes to the business model of turning piracy into profit, the name Voltage Pictures is never far from the action.

The Los Angeles-based movie outfit has tested the legal waters in several jurisdictions in an effort to extract cash settlements from alleged pirates, most recently in Australia with its movie Dallas Buyers Club.

In 2012, Voltage targeted Canadian ISP Teksavvy in a long drawn out battle to identify 2000 allegedly pirating users in order to force them to settle. Now, four years later, Voltage are back again with a new strategy.

This week the company filed an application in Federal Court, requesting certification of a reverse class action against an unquantified number of BitTorrent users who alleged shared five movies including The Cobbler, Pay the Ghost, Good Kill, Fathers and Daughters, and American Heist. 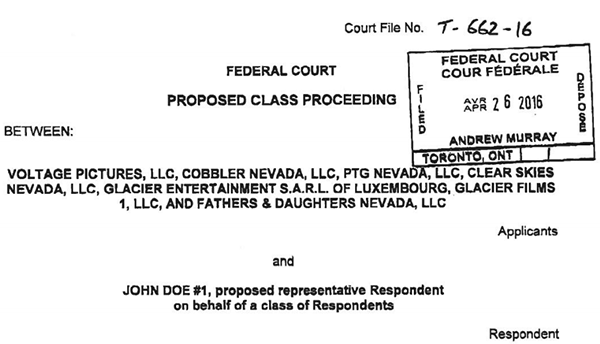 “Class actions typically involve a representative plaintiff who represents many others who have suffered the same harms from the actions of the defendant. Reverse class actions feature a single plaintiff (Voltage) and multiple defendants (the alleged file sharers),” Geist explains.

According to the case documents (pdf) Voltage intends to build its case around a single and as-yet-unidentified customer of ISP Rogers. He or she is referred to as John Doe #1 and by the IP address allocated when the alleged offense took place.

“Through custom-designed software designed to track copyright infringements, and the online identities of those who commit such infringements (by way of IP address and time of infringement), the Voltage Parties have identified many thousand instances of their films (including the Works) being illegally offered for download from Individuals using the Internet,” the Voltage application reads.

“The proposed Representative Respondent, John Doe #1, as well as each member of the proposed Respondent Class….are persons whose names and identities are currently unknown to the Voltage Parties, but who have unlawfully, and without the Voltage Parties’ authorization or consent, infringed copyright in the Works, including by illegally uploading and distributing the Works for free, in full or in part, over the internet.”

Interestingly, Voltage is open about the reasons behind this new strategy, noting that widespread piracy and the high cost of litigation means it has sought a cheaper way to target large numbers of infringers at once.

But the big question remains – could such a strategy work? Professor Geist has his doubts.

“One of the biggest concerns involves questions of representation for the defendant class. Before certification [of the reverse class action], the court will want assurance that the interests of the defendants will be fairly represented. But who will represent those interests? Who will pay for the legal counsel?” Geist asks.

“Unlike a plaintiff-led class action, where lawyers are often willing to invest in the case, there is no payoff at the end of this case and finding someone to represent the class will be a challenge when the only named representative is John Doe #1.”

But the problems don’t stop there. Geist says that in a certified reverse class action defendants actually have the option to opt out of the class.

“In other words, after going through the process of trying to meet the requirements for class proceedings, all the defendants will be permitted to simply walk away,” he explains.

If they do, however, other questions are raised, including whether those who opt-out will be allowed to keep their anonymity. If they are not, this could play right into Voltage’s hands.

Copyright cases are complex in their own right but this strategy from Voltage will set in motion a vigorous scratching of heads. Definitely one to watch.