With more than 10 million peers and 1,614,356 active torrents, Denis.Stalker ended up in third place in our ranking of the largest public BitTorrent trackers last summer. Running on the Opentracker software, the tracker has been a household name in the BitTorrent community for years.

A few months ago, however, the tracker suddenly went offline for no apparent reason. The official blog went silent and calls from the public to the once popular tracker remained unanswered.

Even today the old denis.stalker.h3q.com is still unresponsive, but the people behind the project did revive it under a new name a few days ago. The denis.stalker tracker has moved to a new home at tracker.ccc.de.

One of the reasons for the change in domain name is the recent rounds of seizures where several file-sharing related domains were pulled offline. Although the standalone tracker is not the first target that would come to mind, a non-US controlled domain is simply the safest option nowadays.

The tracker is now hosted on the main domain of the influential hacker organization Chaos Computer Club (CCC), which is one of the best spots to be in. The German based CCC has more than 4000 members and hosts Europe’s largest hacker congress December each year.

One of the main motives of CCC is to strive for “freedom of information,” with fits well with the operation of one of the largest BitTorrent trackers on the Internet.

The new tracker address responds on port 6969, just like the old one. This means that people who know how to edit their hosts file can update it to allow torrents with the old domain-name to work.

To help the adoption of the new tracker address The Pirate Bay is adding it to all new torrents that are uploaded to the site. At the time of writing, the new domain has been in use for just a few days, but it is already tracking 58,787 torrents and over 500,000 peers.

So, although the denis.stalker.h3q.com name is not coming back, the service it provided has been reinstated. That, plus an army of hackers to defend it in case outside forces try to silence it. Not a bad change at all. 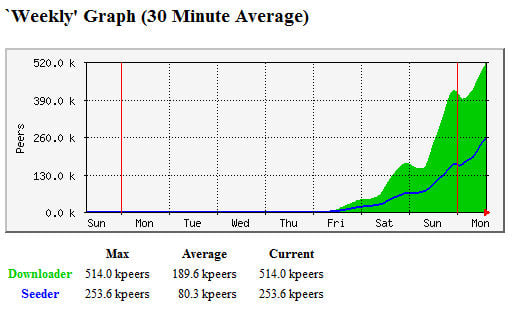