There’s no shortage of ways to obtain music online for free, but surprisingly there are plenty of people who will pay hard cash to obtain MP3s, even though they aren’t buying them from official sources.

For well over a decade there have been big sites, mainly hosted in Russia or Ukraine, that allow their users to download music for a fraction of the prices quoted by outlets such as iTunes. Historically the sites claimed protection under licensing from the Russian Multimedia and Internet Society (ROMS) but that has always been a controversial assertion. Few if any pay money to western labels.

One of the most famous, AllofMP3.com, generated dozens of news headlines around 2005 and even became a political issue when the United States suggested that Russia’s entry into the World Trade Organization would be threatened by the site’s existence.

On August 22 2012 and after 19 years of waiting, Russia became the 156th member of the WTO but despite complaints from the U.S., dozens of similar sites continue to operate in Russia and across the border in Ukraine.

Although many have come under pressure from payment providers, most still seem able to take money, even from giants Visa and Mastercard. Previously sites have chosen to charge a few cents per track (around $1.00 per album) but more recently the trend is to offer unlimited music for a set price. Others allow users to charge their accounts with payments of around $25.00 each in order to spend those balances over time.

One of the sites offering this model was LegalSounds. Online since 2005 and launched with a campaign that announced “The end of peer-to-peer networks is near!”, the site offered MP3s for around $0.09 each. But while this may have worked well for a while, the party is now over. 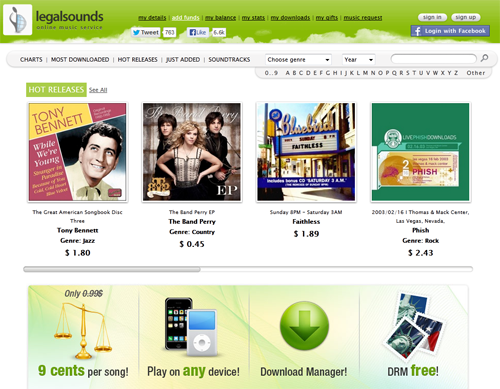 “We are terribly sorry, but due to recent changes in Russian Federation legislation (Anti-Piracy Law, which came into force August 1), we can’t continue offering you our service,” LegalSounds announced in a brief statement.

“Thanks for all of you, who supported legalsounds.com through these years. We hope to come back with something new.”

It’s far from clear why LegalSounds felt an urgent need to close down. Thus far no application has been made to the Russian authorities to have content removed from other MP3 sites under the new legislation (it only covers movies and TV shows) and there is currently no indication that other sites intend to follow.

In the meantime and for the customers hit by the closure, the outlook isn’t good. LegalSounds’ Facebook page appears to have been abandoned, leaving behind only furious ex-customers who seem to have lost all the money they had in their accounts. While there are threats ranging from class action to murder, few users of the site appear to have read LegalSounds’ terms and conditions.

“Only payments made from credit cards are refundable. The entire amount of transaction is subject to be refunded. Partial refunding is not allowed. Refund can’t be provided when customer used part of the balance,” the ToS on the now-dead site used to read.

Whether this closure will have a chilling effect on the cheap MP3 market remains to be seen. That will largely depend on whether other sites follow suit.