As one of the largest online retailers, Amazon is the go-to store for many people.

Amazon became big by selling books and in recent years eBooks have become some of the fastest selling items. However, pirates are now directly targeting the company’s successful business model.

With a new Chrome extension pirates are entering Amazon, effectively transforming it into a pirate ‘store.’

When the LibGen extension is installed, it adds a new row on top of the Amazon product page of books that are also available through unauthorized sources.

The plugin uses data from the Libgen.org search engine which lists over a million books. Below is a screenshot of an Amazon book page, with a new row on the top linking to pirated downloads of the same title. 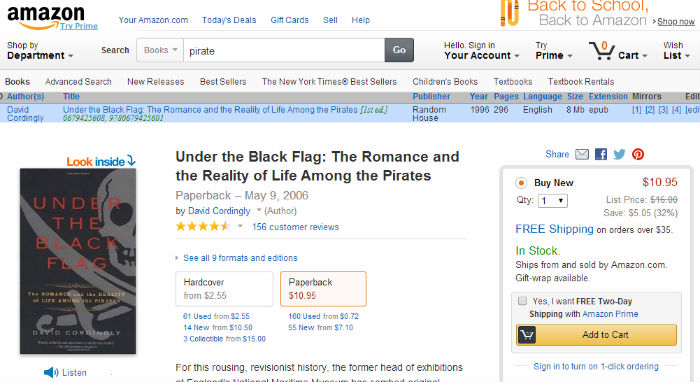 LibGen, short for Library Genesis, lists a wide variety of pirate sources for most books, including direct downloads, torrents and magnet links. It appears to work well, although there are occasional mismatches where links to books with similar titles are listed.

Needless to say book publishers are not going to be pleased with Amazon’s unofficial feature. Whether Amazon plans to take any action to stop the extension has yet to be seen.

The idea to transform Amazon into a pirate site is not entirely new. A few years ago a Firefox plugin integrated Pirate Bay download links into the site, which also worked for music and movies. This plugin was quickly taken offline quickly after the news was picked up by the mainstream media.

There are still other extensions floating around with the same functionality. Torrent This, for example, enhances Amazon with links to Pirate Bay download pages for all sorts of media, much like the “Pirates of the Amazon” plugin did.