Data consumption patterns on the Internet have changed rapidly over the last years. Just five years ago some studies estimated that up to three quarters of all the bandwidth on the Internet was consumed by P2P traffic. At the end of last year this bandwidth share was down to 39% according to Cisco, and by 2014 it is expected to go down even further to 17%.

This doesn’t mean that there is a decline in interest for P2P or BitTorrent though, as the absolute traffic numbers are expected to rise year after year doubling to 7 Petabytes per month in the next four years. However, as the rest of the total Internet traffic grows even stronger because of Youtube and other streaming sites, P2P traffic as a percentage of all Internet traffic will decline.

By the end of this year, P2P traffic will not be the largest Internet traffic type for the first time since 2000. Internet video traffic is expected to take over this honorary title for now, but this may very well change in the future as P2P video streaming will be widely adopted.

Aside from traditional P2P traffic including BitTorrent, eDonkey and Gnutella, file-hosting services such as Rapidshare and MegaUpload will continue to gain popularity in the coming years. These other types of file-sharing services will grow explosively according to Cisco, increasing nearly eightfold to 4 Petabytes per month in 2014.

Together all types of file-sharing traffic will nearly triple by 2014, still accounting for 27% of all Internet traffic. Internet video is predicted to account for 46% of all traffic in the same year. 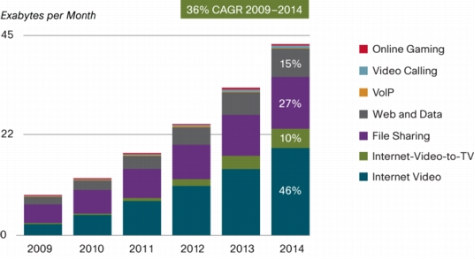 The Asia-Pacific region will remain the center of file-sharing as it continues to account for nearly half of all file-sharing traffic on the Internet. Cisco’s Visual Networking Index makes no prediction about BitTorrent’s market share among P2P application but as the current trend continues it is expected to dwarf the competition.

Cisco Draws Attention To The Rise of Pirate IPTV

File-Sharing Traffic Predicted to Double By 2015